Friday, August 7
You are at:Home»News»Sarawak»Adenan says he has picked polls date 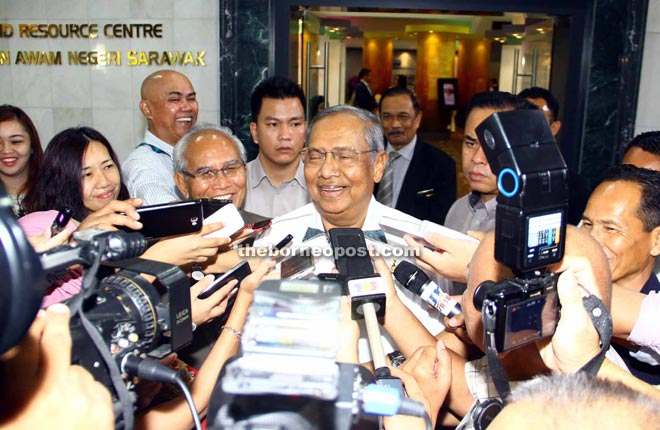 Adenan fields questions from the press. — Photo by Chimon Upon

KUCHING: Chief Minister Datuk Patinggi Tan Sri Adenan Satem has picked the date for the next state election, but he did not reveal it to anyone.

Without giving any hint, the state Barisan Nasional (BN) chairman said the date was definitely before June 20 next year when the current State Legislative Assembly expires.

“I have decided on the election date, but I am not giving it away,” he told reporters after launching the Chief Minister’s Office ‘National Month and Fly the Jalur Gemilang’ campaign at Wisma Bapa Malaysia here yesterday.

When asked whether the election would be held this year or next year, Adenan said it would definitely be held before June 20, adding that the list of BN candidates was almost finalised.

He had previously said the BN would be fielding several new faces in this state election.

On Aug 18, The Borneo Post reported Adenan as saying he could dissolve the State Legislative Assembly after presenting the state Budget in November.

He reportedly said the important thing now was for the 11 new state seats to be approved by parliament so that they could be included in the coming state polls. He also said he had talked to Prime Minister Datuk Seri Najib Tun Razak about the 11 new seats, namely Batu Kitang, Stakan, Serembu, Triboh, Gedong, Kabong, Tellian, Selirik, Murum, Samalaju and Long Lama.

Najib is expected to table the proposed new seats in the October sitting of parliament, which can be passed by a simple majority.