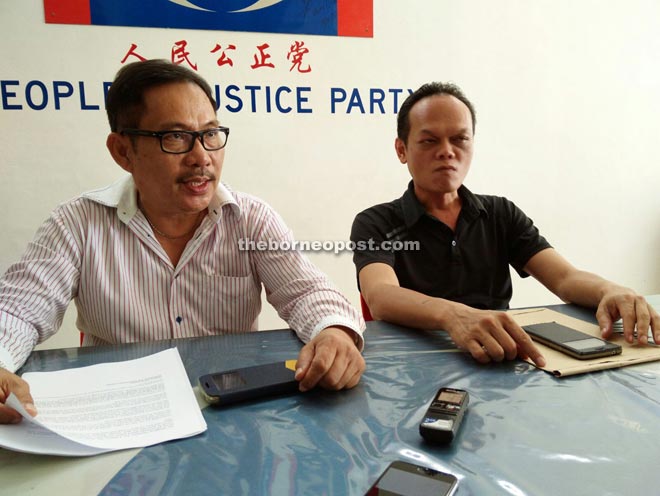 Boniface (left) and Francis during the press conference.

KUCHING: Landowners who participate in Sarawak Land Consolidation and Rehabilitation Authority (Salcra) land schemes in the Bau-Lundu region are complaining about the poor dividend payouts since 2013.

PKR Mas Gading branch secretary Francis Teron Kadap said a participant by the name of Jules, who owns 3.5 hectares of land in Phase 4 of the Stenggang Plantation, which was started in 2007, received RM5,871 in dividends from Salcra in 2011, giving him an average income of RM489 per month.

“In 2013 and 2014, he only received RM35 and RM70 respectively. That effectively put him in the hardcore poverty group. His only consolation is the document of land title has been issued and is now in his custody,” he told a press conference recently.

A participant himself, Francis, who owns 4.8 hectares of land in Phase 4 of the Stenggang Plantation, said he only received RM35 in January and RM39 in July, and believed that other participants also suffered the same fate.

“In Phase 6 of the Undan Plantation in Lundu, landowner and participant Mr Tejim echoed the frustrations of the participants in Stenggang Plantation. In fact, our enquiries have revealed that the participants and landowners in Salcra oil palm plantations throughout Sarawak all have similar complaints.”

He said all attempts by the participants to enquire from Salcra the reasons for the miserable amount of dividends they have received over the past two years had not yielded any satisfactory answer, adding the authority’s lack of transparency in dealing with the dividend issue had angered almost all the participants.

“The participants say they do not even know how much of our loan is still left unpaid. The participants of Stenggang and Undan plantations have commented that Salcra has failed in its three principal key-performing indicators.

“They were supposed to eradicate poverty, create employment and improve the living standards of the natives in the rural areas, but instead, they seem to have perpetuated poverty. They lament that whatever employment opportunities that have been created in the estates, have benefited the foreign labourers instead.”

Francis said the very low dividends had made many participants very vulnerable, with many having sold off their land in the plantations to raise cash for their families’ upkeep and their children’s education.

“The other sore points for them are the delay in the issuance of land titles for land in the plantation and the very low rate of wages offered for labour in plantation. The Stenggang Plantation has four phases.

“The government’s practice is to issue land titles during the campaign period before an election. They also noticed that the parcels of land owned by politicians are given priority. Because of this, there are parcels of land in all four phases that have not been issued with land titles yet, including in Phase 1 which started in 1993.”

He said the landowners and participants are now demanding that the government take cognisance of the impact of the Goods and Services Tax (GST) and the rapidly increasing cost of goods on their quality of life, besides asking the state government to immediately issue the land titles and thereafter, release them and their land from their bond to Salcra.

“They can’t help but notice smallholders are doing much better than them and they want the opportunity to cultivate their land themselves.”

Meanwhile, PKR Mas Gading chairman Boniface Willy Tumek said based on the participants’ observations, the problem was due to weaknesses in the management of the oil palm estates.

“The grass cutting, the scrubs and clearing, the part that is nearest to the road that can be seen by the public is taken care of, but the ones in the inner area of the plantations, there is no maintenance at all.

“Besides that, fertilisers are so badly managed that if 100 bags are delivered to the estate, maybe 70 bags will be applied to the oil palm trees, but the other 30 bags will be somewhere in the streets, maybe taken away and sold to the smallholders. Because of this leakage, the trees are not well fertilised and therefore, the output is low.”

Boniface, who is also state PKR vice chairman, said the participants also wondered why it was necessary for Salcra to have a multi-storey headquarters, which is currently only between 50 and 60 per cent occupied in Kota Samarahan; when the land it managed is only one-tenth of the size of land managed by Felda.