Tuesday, September 29
You are at:Home»News»Sabah»Four pupils sit for UPSR in hospitals 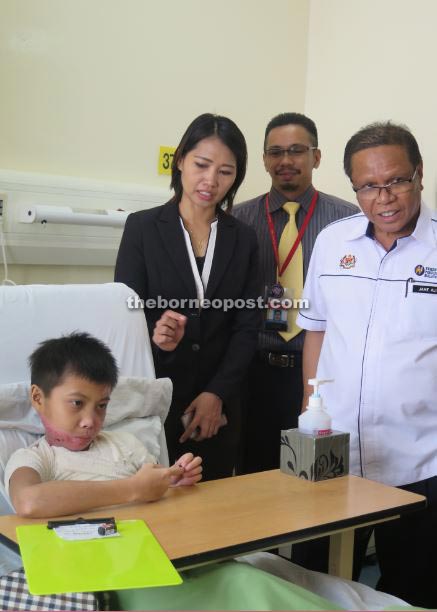 KOTA KINABALU: After his 12-year-old son suffered from a third degree burn, how many ‘A’s his son will get in his Ujian Penilaian Sekolah Rendah (UPSR) has become a trivial matter for John Majaun from Pitas.

“The most important thing right now is Alex’s health and recovery. Passing the subjects would do. Getting one ‘A’ would be more than good enough,” said John, 35.

Alexzander John, a student of Sekolah Kebangsaan (SK) Pandan Mandamai, Pitas, met with the mishap that burned 37 per cent of his body on May 29.

He had accidentally used petrol to light a kerosene lamp in their home at Kampung Mandurian Laut, where electricity power supply is yet to be available.

“My family and I were in another house when it happened as there was a ceremony at our kampong. Alex and two other friends had gone to light up the lamps in our house.

“We have no car so I had to carry him for about a mile or so while he cried in pain, before we got to Pitas Hospital,” said John, relaying the story at the Sabah Women and Children Hospital (Likas Hospital) yesterday.

Still recovering from the burn, Alex had to sit for his UPSR at the hospital where he was transferred on June 2 from Pitas Hospital.

Although warded, out of school and still in the process of recovering, Alex remained fervent in his pursuit of education.

Still struggling in his speech as a result of the fire that burnt most of his right leg up to his neck, Alex said he aspired to be a teacher.

“It’s sad to see him in his condition now. But his zeal is what moves us,” said John, when met yesterday during a visit by state education director Datuk Jame Alip.

Hospitalised for appendix since a week ago, Muhammad Hamez Amirullah of SK Likas is not putting too much hope in his UPSR.

“5B,” said the boy, smiling, when asked about his target result.

But above all, Hamez just cannot wait to be discharged from the hospital and go back to school.

Alex and Muhammad Hamez are two of the four Primary Six students from different schools who have to sit for their UPSR at Likas Hospital, while two other students are sitting for their papers at Queen Elizabeth Hospital II and Lahad Datu Hospital respectively.

Among the four, one is a cancer patient, another is suffering from heart ailment and the rest were due to accidents, including Alex.

Lahad Datu district education officer Umin Sadi said Muhd Luqman Hakim Bin Noorol Esslam from SK Pekan I and Baitinal Saddiq from SK Sahabat 4 have to sit for the examination at Lahad Datu hospital after being involved in a road accident and suffering from blood cancer respectively.

The two are among the 2,476 students from 43 primary schools in Lahad Datu district who are sitting for the examination at 45 centres from yesterday.

Muhd Luqman Hakim’s mother, Sarimah Abd Rasis, 36, said her son was currently receiving treatment in Kota Kinabalu and Lahad Datu after being admitted to the hospital in May, this year.

Sarimah said Luqman who wants to become a policeman, had prepared and studied hard for the examination.

Baitinal said she did not mind sitting for the examination on a hospital bed as she had been studying and preparing hard for the UPSR.

Also present at the hospital to show support to the two students was Silam Wanita Umno chief Mizmah Appehdullah.