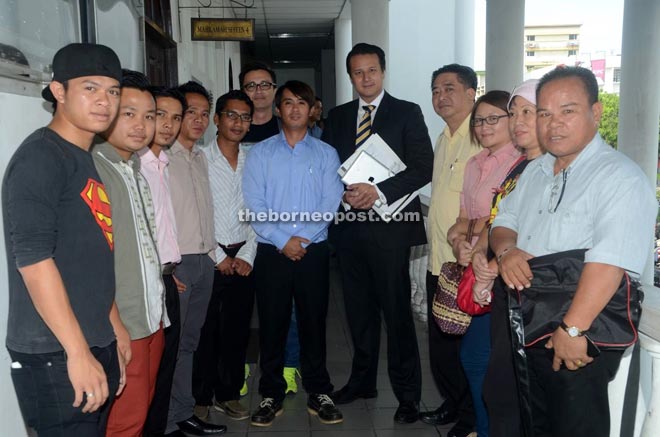 The Sabah Sarawak Keluar Malaysia movement volunteers with their counsel Tengku Ahmad Fuad outside the Sessions Court after the proceedings yesterday.

KOTA KINABALU: The Sessions Court here adjourned to October 15 this year to mention the case of four volunteers of the Sabah Sarawak Keluar Malaysia (SSKM) movement, who were charged with allegedly propagating the secession of Sabah from Malaysia.

Judge Dean Wayne Daly set the date for Azrie Situ, 24, Jemmy Liku Markus Situ, 32, Erick Jack William, 28, and Joseph Kolis, 29, following an application made by counsel Tengku Ahmad Fuad for all the accused persons, when the case came up for hearing yesterday.

Fuad applied for postponement pending the disposal of the criminal application before the High Court to have his clients’ case heard there.

Deputy public prosecutor Azeezi Nordin did not object to the postponement as the High Court had already set October 1 to hear the application made by the defence.

The accused persons were caught at the weekly tamu in Tuaran on February 1 at around 9.50am for supposedly having seditious pamphlets urging Sabah and Sarawak to leave Malaysia.

Erick allegedly had 91 pieces of the publication, Joseph 13 pieces, Azrie five pieces and Jemmy one piece.

The offence under Section 4(2) of the Sedition Act provides for a fine of up to RM2,000 or a maximum jail term of 18 months, or both, upon conviction, and the offensive material is to be seized and destroyed.