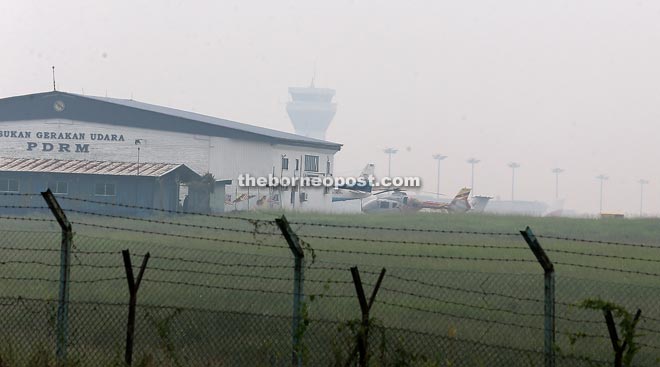 The visibility of Kuching International Airport’s (KIA) control tower is affected by the worsening haze condition. — Photos by Chimon Upon 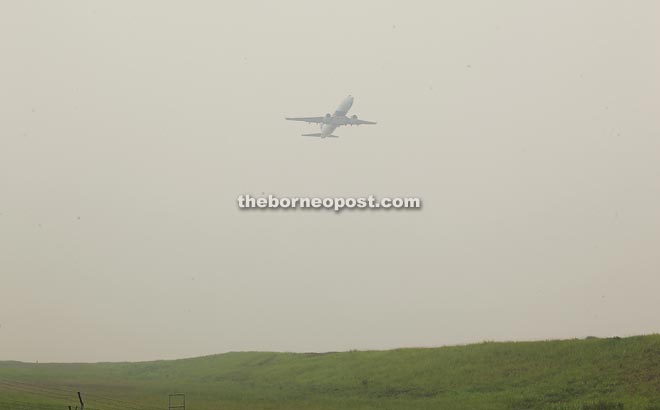 A plane takes off from Kuching International Airport (KIA) into the hazy sky. 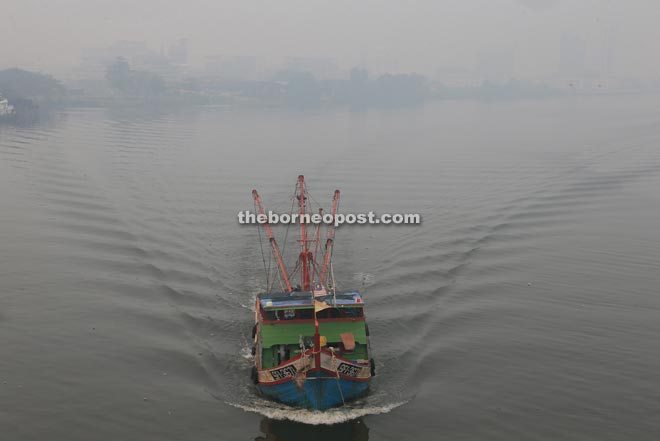 A fishing boat is seen travelling down the Sarawak River amidst the hazy surroundings. 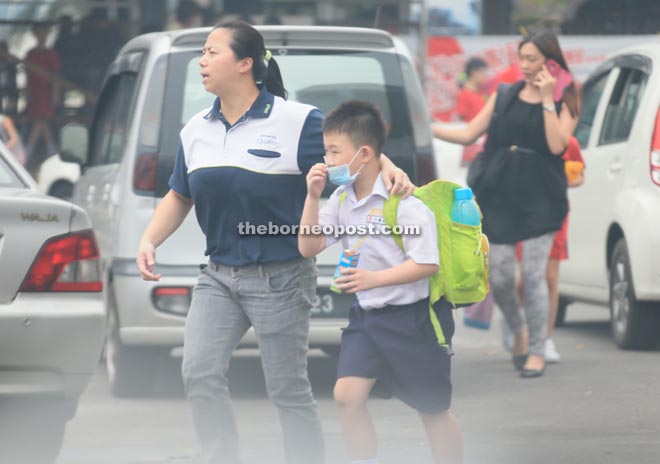 An adult guides a young boy wearing facemask while crossing a busy street in Kuching. 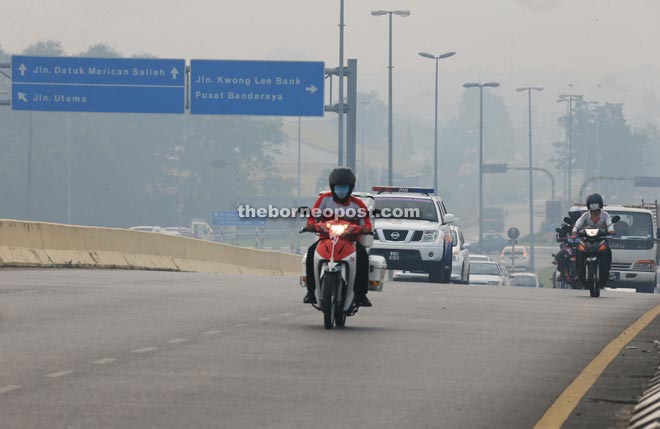 Motorcyclists wearing facemasks as they travel along Pending Road in Kuching. — Photo by Kong Jun Liung

Though these three areas recorded moderate air quality on Sept 3, the condition deteriorated as on Wednesday (Sept 9), Air Pollutant Index (API) readings for Kuching, Samarahan and Sri Aman had risen to 103, 113 and 105 respectively.

According to the website of the Department of Environment, the API readings for Kuching and Sri Aman yesterday were 146 and 154 with Samarahan recording the highest reading at 167 as at 5pm.

Sarikei was also the latest to be affected by the worsening haze condition as it recorded a reading of 102, thereby achieving an ‘unhealthy’ status, which reached 104 by 5pm.

State Natural Resources and Environment Board (NREB) controller Peter Sawal said this was mainly caused by the trans-boundary haze as numerous hotspots had been detected in neighbouring Kalimantan.

“More than 300 hotspots have been recorded over the Kalimantan border last week and this is not improving anytime soon due to the large scale open burning activities there,” he told The Borneo Post when contacted.

Asked if the state would experience a similar situation in 1997, Peter expressed optimism that “it won’t be as bad.”

“If that happens then we will not expect an intense trans-boundary haze like in 1997,” he opined.

Though open burning activities continued to be carried out at the other side of Kalimantan border, state agencies had been continuously working together to control the air pollution.

“The NREB has put all open burning permits on hold until the situation improves,” he noted.

Meanwhile, state Education Department has issued a reminder to all schools throughout Sarawak following the recent hazy situation.

A spokesperson from the department said the reminder, in which the standard operating procedure (SOP) for dealing with haze was clearly outlined, had been delivered to all principals, headmasters and headmistresses on Aug 28.

Based on the SOP, schools are given the authority to temporarily close when the API reading hits 200 and above.

But they are required to report the closure to their respective district education offices.

“The SOP is clear. When the API reaches 200 and above, schools will have to close. If the API is above 150 and below 200, schools are advised to move their co-curricular activities either indoor or to a later date.

“If the API is above 100 and below 150, schools are advised not to involve health-sensitive students like those asthmatic in outdoor activities.

“The letters of reminder were issued in line with the recent circular of the Ministry of Education (MoE),” he said when contacted here yesterday.

He said the circular listed measures to be taken to ensure the health and safety of students in schools situated in areas where the hazy situation is considered critical.

He, however, asserted the haze situation in the state “is still under control” and that the department would closely monitor the situation.

“For now, it is only Kuching and Samarahan that are quite bad. The other divisions are not so serious. Even the flight that could not land in Kuching had been directed to Sibu, which means the situation is not so bad in Sibu.”

The API reading for Kuching stood at a little over 170 at the time of the interview.

It is understood that the only one time schools in the country were given the temporary closure order was during the 1997 Southeast Asian haze – a large-scale air quality disaster affecting not just Malaysia but also Singapore, Brunei and Thailand as a result of fires in Kalimantan and Sumatra, Indonesia.

In a related development, Malaysia Airlines Berhad (MAB) confirmed that several flights were affected by the worsening haze.

“Owing to the current severe haze condition in parts of Malaysia, several Malaysia Airlines flights in and out of Kuching on 10 September 2015 were affected,” MAB said in a press statement.

“The airline is monitoring the situation closely and will adjust its flight operations into and out of Kuching International Airport when necessary.”

In another development, Malaysia Airports Berhad in a statement late yesterday evening said there were five diversions of flight arrivals and nine delayed movements.

A spokesman for Malaysia Airports said the haze situation here was bad and visibility was 2,000 metres at 4pm yesterday.

He advised passengers to check their flight schedules with their respective airlines.