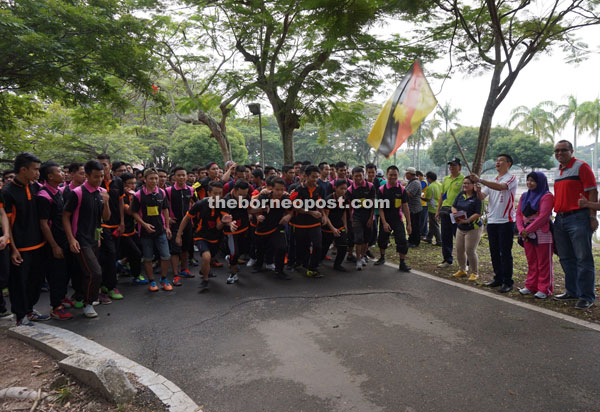 Chin flags off the runners at Miri Bulatan Park, witnessed by (from right) Chai, Hayati and Choo.

The participants comprised not only students and teachers, but also parents of students wanting to support the fundraising run.

“The credit also goes to the PTA on their commitment in helping the teachers enhance the achievements of students be they academic or non-academic,” he said in a speech read out by UPP Senadin chairman Councillor Keith Chin.

Chin represented Hii at the flag-off of the run as well as the unveiling of Miri Vocational College PTA’s new logo.

According to Hii, vocational education is getting more popular among students due to the high demand for vocational graduates in the job market, which offers great prospects around the world.

“The employment opportunities for highly skilled workers are abundant, seeing that such technical skills are vital in meeting the needs of various industries.

“Many of those coming from the vocational field are earning lucrative incomes.”

Hii further said the government had been supporting this field, in line with the estimation of the job market requiring at least 46 per cent of workers possessing technical and vocational skills by 2020.