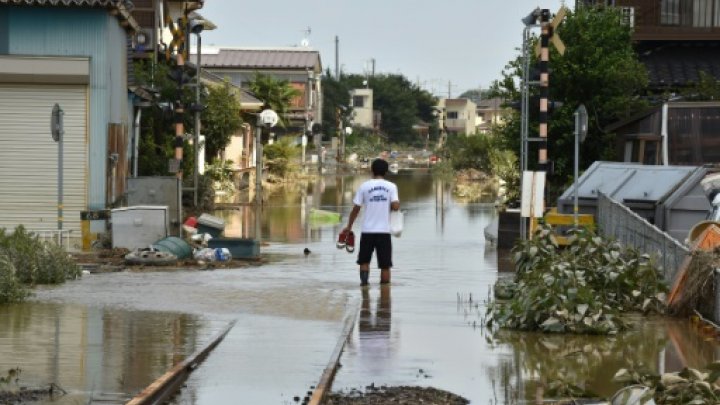 A man wades though flood water in Joso, Ibaraki prefecture, on September 12, 2015 -AFP

JOSO CITY (JAPAN): Japanese Prime Minister Shinzo Abe on Saturday visited a disaster-struck city north of Tokyo in the aftermath of massive flooding that killed at least three people, as rescuers raced against time to find more than a dozen still missing.

Parts of Joso, a community of 65,000 residents, were washed away Thursday when a levee on the Kinugawa river gave way, flooding an area that reportedly spans 32 square kilometres (12 square miles) after the worst rains in decades.

“I felt more dead than alive,” said a man who was rescued Saturday morning after days trapped inside his home.

“I lived by drinking tea as there was no food. I’m so glad that they came to rescue me,” he told public broadcaster NHK.

Akinori Nagaoka, 39, returned home with his son to find the first floor of the house flooded with muddy brown water.

“I have never seen anything like this before. I wonder when we can come back and live like it was,” he told AFP.

On Saturday morning, Abe visited the disaster-hit town, about 60 kilometres (37 miles) outside Tokyo, as some 2,000 troops, police and firefighters were deployed to rescue more than 100 people still trapped in water-logged buildings, the bulk of whom were patients and medical staff inside a flooded hospital, local media said.

“We’re doing our best to make things safe by reconstructing the broken (river) bank as quickly as possible to prevent a repeat of this disaster,” Abe told reporters.

– Picking up the pieces –

The Japanese leader reviewed the extensive damage from a military helicopter and met with evacuees at a shelter.

As the sky cleared, water levels began to return to normal at the river, after the heaviest rain in years pounded the country in the wake of Typhoon Etau, which smashed through Japan this week, leaving a trail of destruction in its wake.

“We are working hard to rescue people trapped in buildings and find those who still are unaccounted for, while pumping out water,” a local government official said.

“But water levels are still high in many areas so that has hampered our operation.”

The number of missing in Joso declined from 22 to 15 after police found more victims alive, including a pair of eight-year-old children. It was not immediately clear where the children were found, but some of those missing appeared to have been among those trapped in flooded buildings.

Another person was reported as missing in a northern prefecture.

Police said the third victim was a 25-year-old man helping to clear clogged drains in the city of Nikko, which is known for its historic shrines.

Another river in Miyagi on Friday burst its banks and flooded a populated area but many residents had already been evacuated.-AFP