Tuesday, January 28
You are at:Home»News»Sarawak»‘Think outside the box, get out of your comfort zone’ 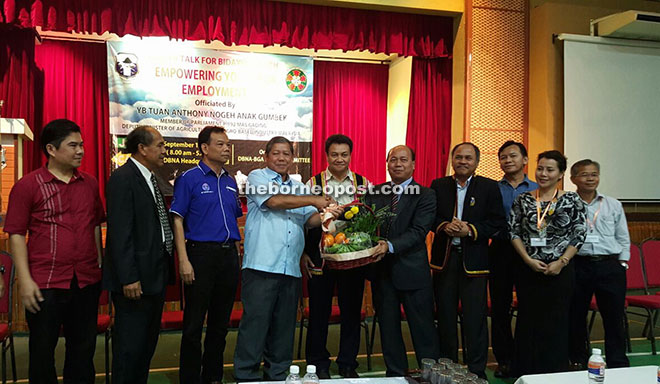 Nogeh (fourth left) receiving a souvenir from DBNA-BGA human resource sub-committee chairman Rayan Narong who is the seminar’s organising chairman after the launch of the event. Also seen is Dr Clarence (fifth left) and other committee members. 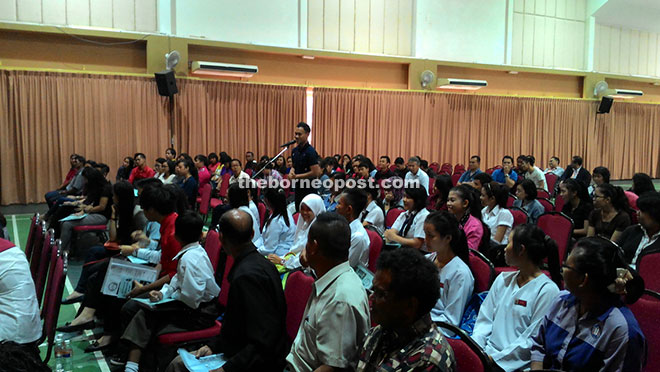 A participant asks a question during the seminar at DBNA hall.

KUCHING: Unemployed graduates are urged to think outside the box and break out of their comfort zone to widen their opportunities for employment.

Deputy Minister of Agro Based and Industries Anthony Nogeh Gumbek said Malaysia had entered a phase where the job market had become very competitive and dynamic.

“Graduates must be prepared to move around to get jobs anywhere in Malaysia. Refrain from saying that I am from Serian so I must work in Serian or I am from Bau so I must work in Bau,” Nogeh told reporters after officiating at a career guidance seminar at Dayak Bidayuh National Association (DBNA) hall yesterday.

Entitled ‘Empowering Youth for Employment’ the one-day seminar was attended by around 200 graduates from Padawan, Bau and Serian.

Nogeh who is also Mas Gading MP said a graduate who had studied accountancy need not end up being an accountant only as the knowledge and skills can be used in other jobs such as administrative officer or banker.

“Also while waiting for a job offer, a graduate can take the initiative to start a banana or pepper garden. This a good introduction to the agricultural sector and, who knows, you might like it,” he added.

He also said initiative was needed for a graduate to enter the competitive job market and the key was never give up.

On another note, DBNA assistant treasurer-general Dr Clarence Jerry in his opening speech said the seminar jointly organised by DBNA and Bidayuh Graduates Association (BGA) is the way forward for the Bidayuh community to be on par with other ethnic groups.

Dr Clarence who is the seminar’s advisor said factors that could contribute to getting employed include equipping graduates with soft skills, hard skills, awareness of employer expectations, and preparedness and confidence during job interviews.

The seminar is also to address unemployment among the Bidayuh community with a population below 200,000 in Sarawak.

DBNA’s official website provides links for students and graduates to access information on tertiary studies, such as agencies providing loans and monetary assistance to students, and a list of universities and colleges.