Saturday, August 13
You are at:Home»News»Sabah»Stamp collection to honour mountain guides 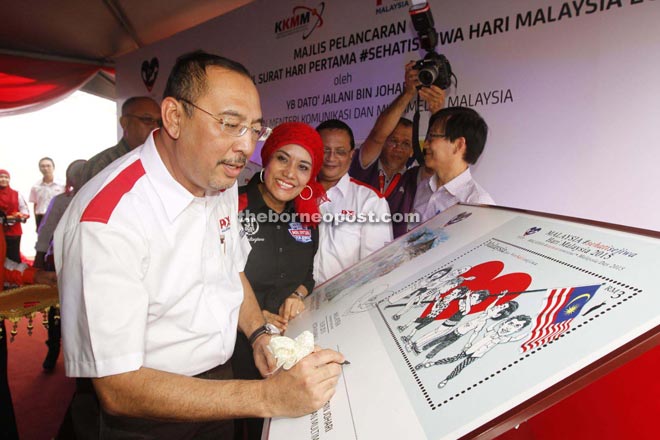 The #sehatisejiwa collection comprising two sets of se-tenat stamps was launched in conjunction with the September 16 Malaysia Day celebration, and can be bought at RM1.20 and RM1.40 respecitively at all post offices.

The se-tenat stamp sets are complemented with a special mini pamplet featuring caricatures of people from various ethnics hoisting the Jalur Gemilang.

The caricatures promoting patriotism and racial unity are sold for RM3 each.

Themed envelopes and folders can also be purchased under the #sehatisejiwa collection.

Pos Malaysia Chief Executive Officer, Azlan Sharim, said the special stamps symbolize the rich diversity of the people of Malaysia, their unity, respect and appreciation towards each other’s unique culture.

“The sense of oneness that all Malaysians share can be seen through their music, dances and the interaction they have with one another during traditional games,” he said, referring to the images found in the collection, which also depicts the tradition and culture of different races in Malaysia, apart from the local guides of Mount Kinabalu.

“I hope we can come up with another collection next year. This year we feature the mountain guides, maybe next year we can find yet another meaningful theme to highlight,” he said.

He also informed that the Transformation of Sabah and Sarawak Postal Services or PTPSS will continue with its third phase this year with a focus on improving weaknesses in the service delivery by introducing several improvements, such as increasing the number of ‘Community Postmen’ and ‘Community Postmen Representatives’ in both states.