Friday, August 14
You are at:Home»News»Sarawak»Unexpected win for duo in dancesport championship 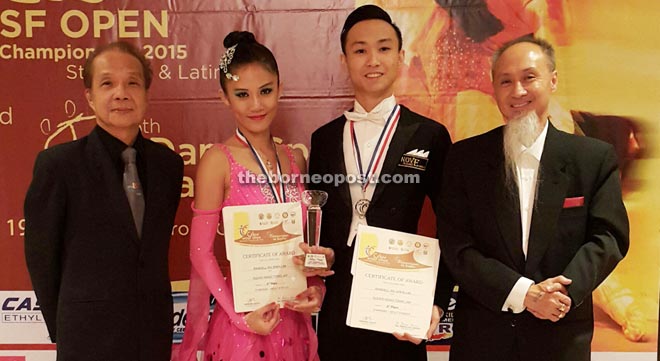 KUCHING: It was a podium finish for Sarawak’s pair of Randell Lim Xiu Zhen and Alexis Jap Hsiao Tding who emerged second in the Adult 4 Dance Standard category of the Cebu WDSF Open DanceSport Championship 2015 held at the Waterfront Cebu City Hotel in Cebu, Philippines on Sept 19.

The event was organised by DanceSport Cebu.

A tiring journey from Kuching to Cebu involving three connecting flights from 4.30am to 9pm on the eve of competition did not deter Randell and Alexis from putting in their best to impress a panel of adjudicators to be placed second in the Adult 4 Dance Standard event.

They also managed seventh place in the WDSF Open Standard category and made it to the semi-finals in the Latin American category.

Randell, 20, a student of Swinburne University of Technology in Kuching and dance teacher Alexis, 25, did well despite not having competed for more than a year due to commitments, said president of Sarawak DanceSport Association, Chester Lim.

They had only hoped to get exposure and experience so the runner-up prize was a big bonus and reflected the potential and talent of both Randell and Alexis, Chester added.