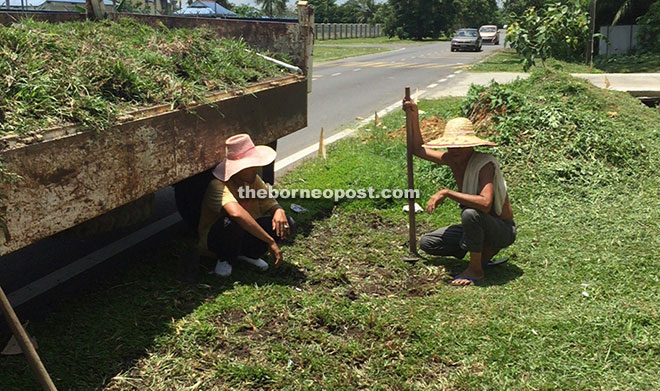 MIRI: Certain quarters have stooped to stealing grass along public roads in an attempt to cut costs.

Miri City Council (MCC) Mayor Lawrence Lai revealed that following a public tip-off on Sept 5 at 10.30am, the council’s

“A police report has been lodged by the council and the police have conducted an investigation and detained the two workers and a lorry belonging to the contractor.

“The two workers have been released after 24-hour detention and the lorry was in police custody for a week. The contractor has been asked to replant the grass as this is his first offence,” said Lai.

Lai reminded the people that the council will not condone any action that contravenes the law, including stealing grass from public roads which is a punishable offence under the Local Authorities Ordinance 1996 for causing damage to government property.

Meanwhile, the council also warned that legal action will be taken against those using residential dwellings for industrial activities like welding and spray painting cars.

“We found that such illegal activities are rampant in Krokop 10 and have taken two cases to court recently,” he said.

“The council will continue to enforce the law and as such we need public cooperation to report any such activities to us.

“For those wanting to do business, kindly carry it out in a proper industrial building and not in residential or housing areas which is a public nuisance and a health and safety hazard,” he stressed.