Thursday, February 2
You are at:Home»Columns»Breaking Barriers»Life is easier with assistive devices
For the freshest news, join The Borneo Post's Telegram Channel and The Borneo Post on Newswav. 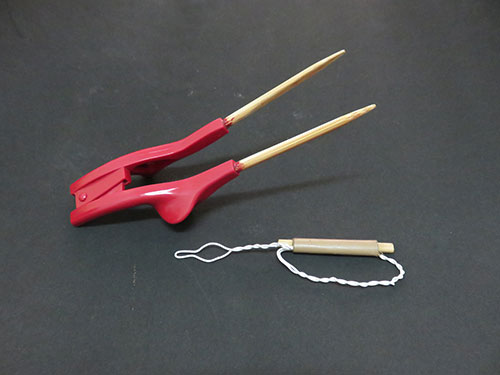 Simple tools like this pair of chopsticks and button hook can make doing tasks easier for disabled people.

ONE thing I learnt from working on disability issues is that there is at least one solution to every problem. The methods to accomplish it may not be conventional but what is important is that they work, like how Deng XiaoPing succinctly put it, “It doesn’t matter whether a cat is white or black, as long as it catches mice.”

I once thought being seriously paralysed spelt the end of my independence. I would have to depend on someone else to help me with tasks for the rest of my life. How wrong I was to think like that. I ultimately realised that with human ingenuity, nothing is impossible. Well, almost. There is still no cure yet for spinal cord injury.

One of the tasks I missed most after becoming paralysed was eating at my own pace and time. Food simply didn’t taste as good as it should be when someone else’s hand is doing the feeding. I had no choice because I could not hold a spoon. That went on for six months until I went to see a physiotherapist.

“You should try to use a big-handled spoon,” she told me, and proceeded to give suggestions to my parents on making one.

As soon as we got home, my mother wrapped a thick piece of foam around the spoon’s handle and voila! Although I held it with great difficulty, that little achievement in doing something by myself for myself was priceless. As my fingers eventually grew stronger, I moved on to using regular forks and spoons. Albeit having to hold it in awkward manner, I felt even more liberated.

Tools like these are called assistive devices. They help disabled people become less reliant on others. From simple utensils like cutlery to big ticket items like motorised wheelchairs, all of them allow us some form of control and consequently independence which greatly improve our sense of self-worth.

It was in Japan that I discovered a wide range of tools that could help me achieve more in improving my daily activities. They were probably designed to cater to the needs of the ageing population there. These tools compensate for the loss of dexterity and coordination that elderly people experience. Disabled people became beneficiaries too as our needs are rather similar.

Of all the things I brought back from that trip, the most valuable were a pair of chopsticks and a button hook. Known as hashi zo-kun in Japanese, the chopsticks were invented for people with limited hand function. With it, I could enjoy noodles and food usually eaten with chopsticks again, never mind that the pair cost me almost RM80. The satisfaction of being able to use one is worth many times the price I paid for it.

The button hook was a handmade present from one of the Japanese training facilitators. I asked him through a translator where I could buy one. He said he would make one for me, which he duly gave to me the following morning. Using it needed more effort than I could muster. I have not used it since the last time I had to struggle with buttoning my shirt. It is a valuable keepsake nonetheless.

I must say that we disabled people are a creative lot too. In our enthusiasm to do as much as we can, we often devise ways and means to get around the common as well as uncommon predicaments we face in the course of going about our daily activities, no matter how severe our impairments may be.

Apart from my wheelchair, there are two other assistive devices that I use frequently nowadays. One is the Freewheel. When attached to the wheelchair, it allows me to traverse over rough terrain with ease. It was invented by a wheelchair user who was frustrated with the difficulty in pushing his wheelchair around his backyard. The other is the hand control kit in my car for depressing the brake and accelerator pedals. Without that, I would not be able to drive.

Imagine someone who is totally paralysed from his neck down. He would usually be written off as helpless and hopeless. I have friends who are like that. When I thought I have seen it all, I was thoroughly impressed when I saw them manoeuvring their wheelchairs by just moving the joystick with their chin. The price for such equipment may be expensive but many of us are willing to fork out as much as we can afford just to gain that little bit more of freedom.

Cheap or expensive, there is no doubt assistive devices improve our quality of life. I would not be as independent as I am now without them. Likewise other disabled people need one or several devices to help them in their daily activities.

Assistive devices are exempted from the Goods and Services Tax implemented in April this year. Unfortunately, up till today, disabled people buying wheelchairs still have to pay the 6 per cent tax. No one from the government could tell us exactly how we can apply for the exemption other than saying we have to produce a certificate from our respective organisations.

Executive members of the organisations I enquired with don’t know what these certificates are. Sales staff of shops selling rehabilitation equipment also have no inkling about it. If the government is truly sincere in giving the exemption, they should make the process simple without giving us ambiguous answers and not make us run around like headless chickens.