Saturday, January 29
You are at:Home»News»Sarawak»Piasau Nature Reserve set to become world’s next eco-landmark 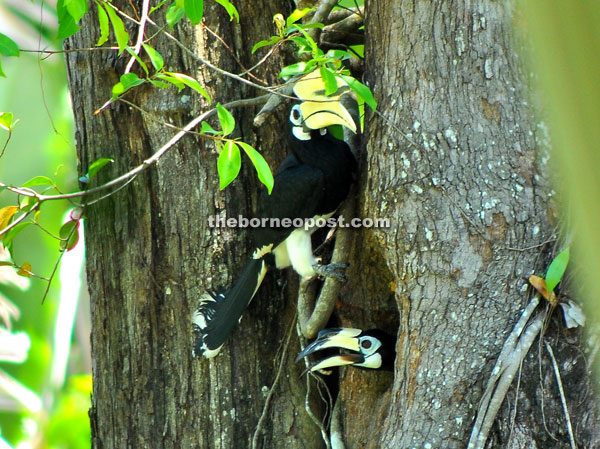 This photo of Faridah, a resident hornbill at PNR which was killed by poachers in 2013, was taken by Parker and is among the materials used during awareness programmes conducted by MNS Miri.

MIRI: The Piasau Nature Reserve (PNR) here will further enhance the image of this city in terms of global tourism and environmental conservation upon its completion by late next year.

The nature reserve – formerly known as Piasau Camp – is a classic example of excellent cooperation between the community and relevant authorities.

Sarawak Forestry Corporation (SFC) deputy general manager (protected areas and biodiversity cooperation) Oswald Braken Tisen said PNR had created a record of a sort in Sarawak by receiving the fastest approval from the government among other projects – some of which could take years and even decades to be gazetted.

He mentioned community involvement including by expatriates here as being among the contributing factors to the speedy approval.

The Malaysian Nature Society (MNS) Miri Chapter chairman Musa Musbah concurred with Braken, adding that the Shell personnel and their spouses in the likes of Dr Giana Minton, as well as Erwin Adam and his wife Paula Versteegen, were among the earliest proponents of the project and those still actively involved in the camp, especially on observing hornbills.

Musa told thesundaypost other strong supporters included Mairead Boland and her husband Dave Paton, Dominique Wan and Brian Graham Parker – all of whom had contributed in their own special ways.

Contributions of the expats

Musa, who is tasked with studying the wildlife in PNR, said Dr Minton was the first to monitor the hornbill’s nest here in 2007 – way before him – and continue to do so.

“But she had only been in communication with SFC. We do not know much about the data she have collected.”

“As for Erwin Adam, who is a member of MNS Miri member and one of the Shell committee members involved in the plan to relinquish Piasau Camp to the government in 2011, he is a key person linking us to the camp,” he said, adding that Adam gave him access to the camp and House 58 to monitor the hornbill’s nest.

“He helped us to link with Shell and the one financing food for my team to monitor the hornbill via Piasau Boat Club. It was his input that paved the way towards the creation of Piasau Nature Reserve Plan,” said Musa, who is also deputy chairman of Piasau Camp Miri Nature Park Society (PCMNPS).

Wan, an active MNS member and a lecturer of geology at Curtin University Sarawak Malaysia, is also water quality expert, according to Musa, adding that she used to follow MNS’ firefly expeditions along the Miri River.

“At PNR, Wan (under Curtin and MNS) is now actively conducting a quantitative survey and cataloguing on the types of rubbish dumped along the beach,” Musa said, stressing that understanding the type of rubbish was vital in finding solutions for the problem.

Then came the couple, Boland and Paton, who are also MNS members. According to Musa, Paton has sponsored the closed-circuit television (CCTV) system that links to the Internet, with Boland covering Internet charges.

“Mairead (Boland) has always been a strong supporter of MNS – she is the one connecting Shell with MNS Miri. Dave (Paton) does a lot of the ground work and monitoring in PNR.”

Boland and Musa had jointly compiled a working paper entitled ‘Hornbills – Agents of Chance’ presented during the inaugural National Hornbill Conference here in August this year.

It would be Boland’s last major contribution with Shell here as she and Paton would leave for Canada to retire there. 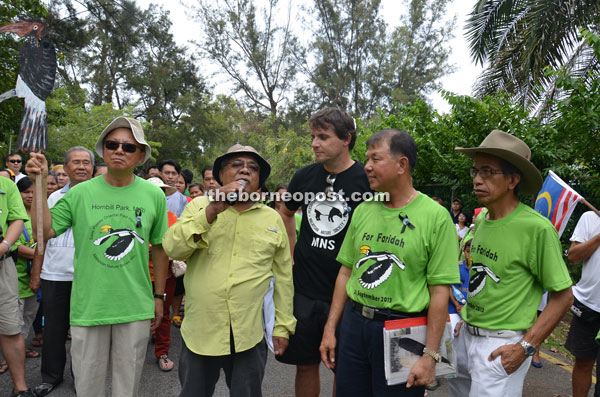 Adam (centre) being introduced to the crowd by Musa (second left) during the ‘Hornbill Walk’, as other PCMNPS exco members including Ting (second right) look on.

Appreciation to those involved

PCMNPS chairman Datuk Sebastian Ting on behalf of the society, Mirians and those joining the monthly ‘Hornbill Walk’ in PNR, thanked the expatriates and those involved for their contributions towards the successful establishment and registration of PCMNPS, as well as the launch of PNR on May 10 last year by Head of State Tun Pehin Sri Abdul Taib Mahmud and Chief Minister Datuk Patinggi Tan Sri Adenan Satem.

“Most importantly, we shall always remember, value and treasure your contributions. We feel sad that you will be leaving us soon to move on to your next undertakings. We wish you well and pray for your joy and excellent health,” said Ting.

Irish-born Boland is a geologist who has found data managing as her calling.

Apart from here, she and her husband have been posted by Shell elsewhere including in Brunei between 1998 and 2002.

“We’re very sad to leave Miri and our friends in MNS. We find Mirians to be warm and inclusive. We also love the cultural diversity,” said Boland.

The couple both have Canadian citizenship and they hope to spend their early retirement in North America.

“We plan to spend our summers on Saturna Island in British Columbia, and winters in Tucson, Arizona (US),” she said. 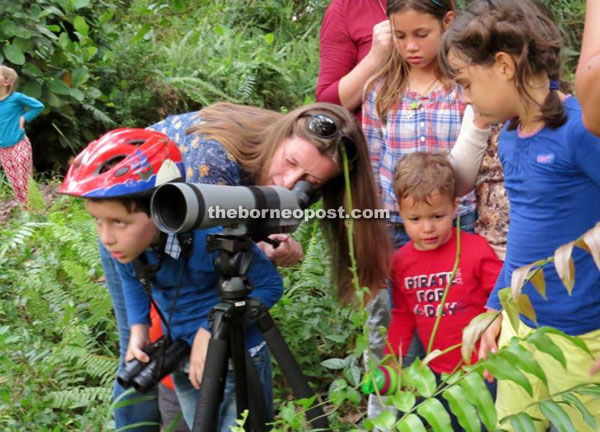 Versteegen takes turns with her son to look through a telescope during a bird-watching activity at PNR.

Boland believed that everybody should realise that they could change the future ; that public pressure could bring results. She regretted that in many cases, people were prepared to just do nothing, believing that it was too late.

“The development of Piasau Camp was a done deal – we proved them (those who opposed) wrong.

“The involvement of local communities in the campaign to save PNR was a great one to witness and be a part of. The ongoing effort to save Kuala Baram wetlands is also a great achievement.

“The next battle should be for cleaner beaches in Miri – the situation has been quite shocking. The amount of litter there is terrible – both natural and those caused by humans. It’s everybody’s problem – we all need to be involved,” she said.

Boland believed that Mirians should be involved in the development of PNR.

“Seek details on it and give your feedback. Ask for the PNR to include the river and the beach.

“Most importantly, allow yourselves and your children to ‘use’ PNR every day. Learn to live with nature and teach your children this as well,” she said.

Boland also highlighted the vital role played by the media as far as the success of PNR was concerned.

“The local media – be they from print, electronic and social platforms – has and will continue to make a huge difference in promoting the campaigns related to PNR and other environmental programmes.

“We would have had no success without your uncanny knack of turning every event into a story – regardless of many of you having to suffer that ‘your birds again’ jokes incessantly.

“Still, this is the media at work in a very positive sense. We really appreciate such contribution.”

The nature reserve, located very near to the city centre, is a green area used by many people for recreation – be it for walking, jogging, cycling and bird watching. It also provides access to the beach, river and all things nature within city limits. 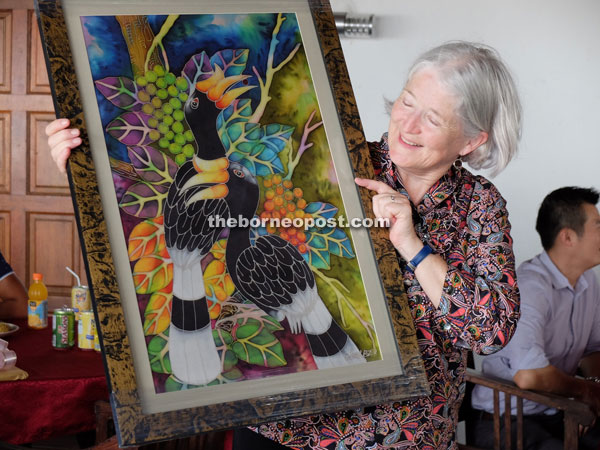 Boland shows a beautiful painting of hornbills, given to her as a memento.