Thursday, February 2
You are at:Home»Columns»Uncle DI»September 16 ……… Remember!
For the freshest news, join The Borneo Post's Telegram Channel and The Borneo Post on Newswav. 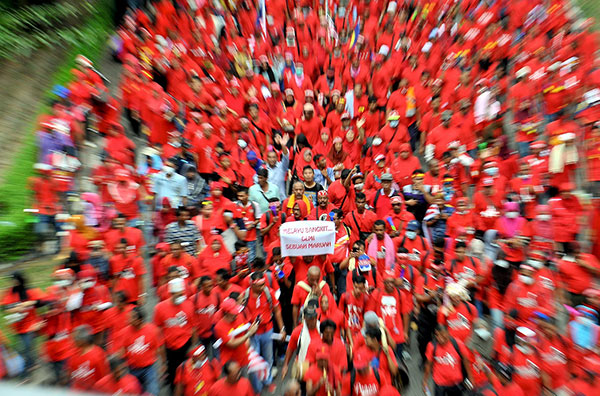 Not a venue for slandering other Malaysians.

AS I was driving around the city and parts of its suburbs on this day, I hardly saw the national flag or that of the state on private buildings. There were some flags on government buildings and related institutions, all right. These flags had been there since the National Day celebrations this year.

I noticed few cars with either flag, except the occasional limousine with Menteri en route to official functions somewhere.

Ten years ago, almost every car or lorry was flying not one, not two, but as many as six flags. For a flashy car with two flags you could not tell whether it was a Cabinet minister’s or his office boy’s. Everybody was a minister of some sort.  Suddenly, this year, they ran out flags.

Lest we forget, the Sept 16 is Malaysia Day. It was the date agreed to by all the founders of the Federation of Malaysia as the official birthday of that Federation. We are 52 years old now, we are growing up, but we seem to have lost interest in birthdays.

I know that we only started celebrating that day on a big scale two years ago – on its Golden Jubilee anniversary. So it’s taken us 50 years to remember our own birthday … strange, isn’t it?

Before 2013, the date passed by like any other date until Opposition leaders in Kuching took the initiative to remind the people of its significance with a handful of people holding a couple of flags.

I remember taking photos at the Central Padang where a few party supporters were celebrating it. It was led by Dominique Ng and Hafsah Harun, both former legislators of the state. Hafsah was a former state minster. Thanks to them Sept 16 was not an ordinary day but one with considerable significance in terms of the politics of the country.

To me, this gathering of a few nationalists who appreciate a historical event when they see one is more important than a huge rally of people who have a hazy idea of nationalism. The rally in Padang Merbok last week was important in its own right but the organisers were obviously ignoring the significance of Sept 16 when they had to celebrate it with a partisan rally.

Did they ever spare a thought for the other Malaysians in Sabah and Sarawak when they planned the rally of the Himpunan Rakyat Bersatu? I wonder.

In their quest for a permanent political hegemony, they hijacked an important event in the history of Malaysia. They converted it into a game of one-upmanship.

This is a game between Bersih 4 versus Himpunan Rakyat Bersatu, with the latter saying: “What they can do we can do better.” Among the participants were people with a secret agenda: to hurt the feelings of innocent Malaysians. The ‘other Malaysians’ were told to go back to where they came from, according to one report I read.   That was the black mark of that rally at Padang Merbok.

What do they mean anyway, ‘go back to where your ancestors came from’?

Suppose all ‘other Malaysians’ started packing their bags and on the next ship or plane head for Jolo, for Jambi, for Palembang, for Acheh, for Swatow, for Gujarat, for Karachi, for Yemen, for Fuzhou, for Sulawesi, for Java and all the places most Malaysians came from, Malaysia would be pretty empty – good, without many cars because most of the expensive cars would have been taken away by the owners. Imagine Malaysia without cars!

A good chance for the indigenous people in the Peninsula and the natives of Sabah and Sarawak to get back their lands when the former occupiers would have abandoned their plantations? I don’t think so, honestly!

I have lots of friends among those people who would be expelled to the lands of their forefathers. Speaking for myself, I am staying put because my ancestors came from here. Come to think of it, my about great-great-great grandfather had a longhouse on the place where the Petanak Market now stands. Hey, MBKS, can I please have my land back, if I have to ‘return to my place of origin’? I have nowhere else to go until my time is up!

If we spend our joyous national holidays hurling insults and accusations at each other, all interest in Sept 16 would have been totally lost. But I’m not giving up hope. The best way to make the government organise the next anniversary of Sept 16 – the 53rd –  is for the opposition to start its own rally at the Central Padang. Then a jolly game of one-upmanship will be on. Government people will say: “We had better do it before they do.” Competition is one way of spurring people into action.

I bet you a cup of coffee (large) that the government will organise it on a big scale when the federal elections are around the corner. That will sustain interest in Malaysia Day for a few more years.

Meanwhile, let us stick together in Malaysia, our homeland, for better or for worse, until kingdom come.

The apparent reluctance on the part of the authorities to celebrate Malaysia Day on par with Malaya Day (Aug 31) is a puzzle. Festival fatigue? Funds habis?

Let’s look forward with interest to what will happen in 2016!