Saturday, May 28
You are at:Home»News»Sarawak»Bracing for multi-lingual society 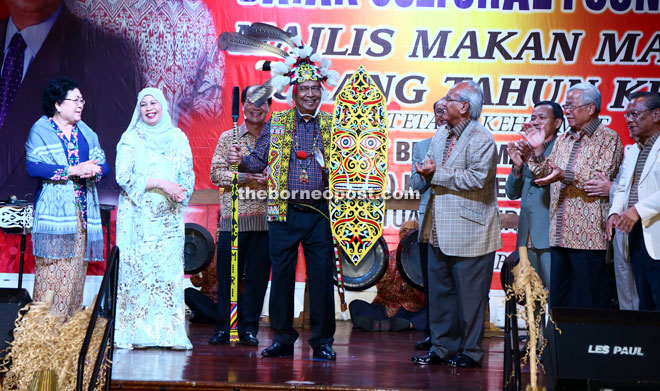 Adenan, wearing a Dayak traditional costume, sharing a light moment with others on stage during the dinner. — Photo by Muhd Rais Sanusi

KUCHING: Most companies now prefer to hire graduates conversant in international languages such as English and Mandarin.

Saying this when speaking at the 23rd anniversary dinner of Dayak Cultural Foundation (DCF) at Riverside Majestic on Saturday night, Chief Minister Datuk Patinggi Tan Sri Adenan Satem noted that most unemployed people in the country were Malay-medium university graduates who were only proficient in the national language.

According to him, it would not be much of a problem for Sarawakians to learn the two languages as most people in the state had been speaking more than one language.

“Putting priority to English and Mandarin does not mean that one is neglecting the national language but it is more a necessity for one to learn as it is one of the demands of the job market nowadays,” he added.

While admitting that language is the identity of a country, he reminded the people not to let blind nationalism take over their rational thinking as some sectors had considered it a sin to put priority to languages other than Bahasa Melayu.

He pointed out that many people failed to be employed because they were only fluent in the Malay language.

“I see most of the unemployed people in the country are Malay-medium university graduates and they can only be efficient in the national language. Unfortunately for them, most companies who are willing to hire graduates nowadays are the ones where the criteria require one to be conversant in international languages such as English or Mandarin,” he said.

At the same time, the chief minister assured there was no restriction for non-Chinese parents to enrol their children in Chinese schools.

He mentioned Minister in the Prime Minister’s Department, Nancy Shukri, as an example of a Bumiputera parent who sent her children to Chinese schools.

On the recognition of Unified Examination Certificate (UEC), a certificate for Chinese school leavers, he said it would be a huge loss of talents if the country’s public universities did not recognise it as UEC holders might go to other countries to pursue their studies and work.

As for the English language, he revealed that the state was in negotiations with the federal government to have its own education system, which might use English language as a medium of instruction for subjects such as Science and Mathematics.

He said he did not like to see the national education system constantly changing between English and Malay for teaching the two subjects.

“English is the right medium for these subjects. We hope to have that implemented in our own education system, which is still in negotiation process with the federal government for now,” he commented. During his speech Adenan spoke in English, Malay and Iban.