Saturday, August 13
You are at:Home»News»Sabah»MH370 wreckage in Tawi-Tawi? 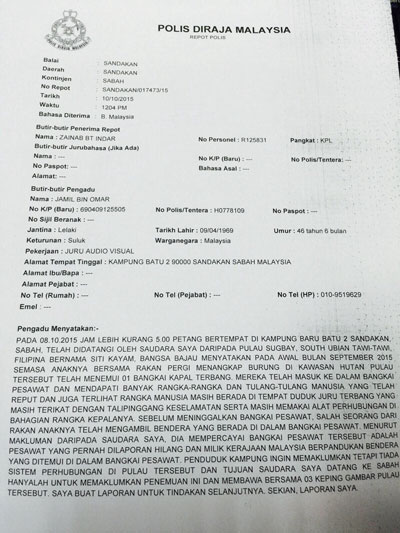 The police report lodged in Sandakan on the alleged discovery of a place wreckage with human skeletal remains believed to be that of MH370.

KOTA KINABALU: A man has lodged a police report in Sandakan claiming his relatives on the southern Philippine island of Tawi-Tawi had discovered a plane wreckage with a Malaysian flag and human remains on it, but police had yet to verify the claim.

“Whether or not the information is authentic, Sabah PDRM cannot verify this at the moment,” he said yesterday.

According to Jamil in his police report on Saturday, his aunt Siti Kayam from Pulau Sugbay, South Ubian, Tawi-Tawi, The Philippines, had come to him in Sandakan to report that her son and his friends had discovered a plane wreckage while hunting for birds in the woods on that island (Pulau Sugbay) several weeks ago.

Inside the wreckage they found skeletal remains, including one in the pilot’s seat with the seat belt fastened and communication gears still attached.

Before leaving the area, one of her son’s friend took with him a flag they found in the wreckage.

Jamil said his relatives believed that the wreckage was that of the missing Malaysia Airlines MH370 aircraft which went missing with 239 people on board in March last year.

He also stated that they had wanted to report the matter immediately but was unable to do so due to the lack of communication facilities on the island, and that his aunt had come all the way to Sabah to inform him of the discovery, bringing with her three photos of the island.

A number of claims of the aircraft’s debris discovery have emerged ever since, including that of a piece of wing found on the shores of Reunion Island in the Indian Ocean, which French authorities confirmed to be a part of the MH370 wreckage.

Previous ArticleUnder Pakatan, all villages within forest reserves will be excised – Lajim
Next Article Sabah wants direct role in posting of teachers