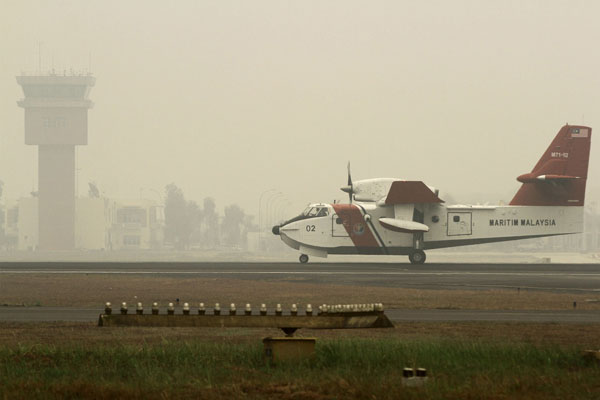 A Malaysian CL415 Bombardier prepares to take off from Talang Betutu air force base in Palembang, in Indonesia’s South Sumatra province as part of their efforts to help Indonesia combat forest fires causing a choking haze that has engulfed the region. — AFP photo

PUTRAJAYA: The Bombardier CL 415 aircraft owned by Malaysian Maritime Enforcement Agency (MMEA), which is involved in a mission to put out the forest fires in South Sumatra, Indonesia, carried out 13 water bombings on the second day of the operation yesterday.

The operation was conducted over an area of 20 square kilometres about 80 nautical miles southeast of Palembang, he said.

“With the limited visibility of only one kilometre, it presented a challenge to the pilots and the crew to ensure that the firefighting operations in the affected areas could be carried out smoothly and effectively,” he said in a statement.

On Friday, besides the bombardier aircraft, MMEA also sent an AS 365 N3 Douphin helicopter with 29 MMEA officers to help fight the fires which has been causing the prolonged haze that is sweeping across neighbouring countries over the past two months.

The bombardier aircraft had carried out water scooping 10 times and water bombing 10 times within four hours of assignment on the first day of the operation on Sunday. — Bernama