Thursday, June 4
You are at:Home»News»Sarawak»Sarawak seeks to be role model for women’s rights 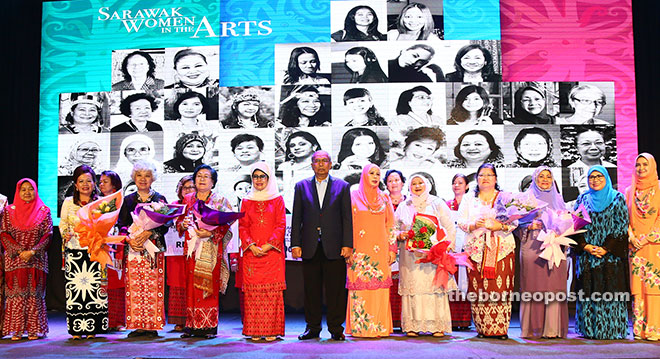 Adenan, flanked by Jamilah on his left and Fatimah, poses with award recipients and other VIPs.

KUCHING: Sarawak hopes to be a role model in terms of equal rights for women.

Chief Minister Datuk Patinggi Tan Sri Adenan Satem said the state would continue to work to ensure that women would be treated equally.

He said Sarawakian women had contributed significantly to the state’s development and put Sarawak on the world map with their achievements over the years.

“Sarawak recognises the importance of giving women the equality that they deserve. Let us do our best to set a fine example for other states,” he said when launching the state-level Women’s Day Celebration yesterday.

He said the state had worked to ensure that women would receive the facilities and services they needed including through the upgrading of the Women’s Bureau into the Women and Family Department.

“I gave this promise last year and I am glad to announce today that I have fulfilled it. But the women did not keep their promise of giving reports on any state legislation that discriminates against women,” he said in jest.

On this year’s celebration theme, ‘Sarawak Women in the Arts’, Adenan said he hoped Sarawakian women could realise their artistic dreams and potential.

“In my opinion, women who get themselves involved in arts can be as great as famous artists such as Leonardo or Michaelangelo. It is also great if the next great and famous artists like them are women from Sarawak as well,” he said.

Meanwhile, Minister of Welfare, Women and Family Development Datuk Fatimah Abdullah called on all women to know their rights and their importance to society.

In line with the celebration’s theme, there were performances by some of the women featured in the book such as legendary singers Datin Senorita Linang, Datuk Sarbanun Abdul Kadir Marican, Rose Iwanaga Khoo and Wong Siong Ting.