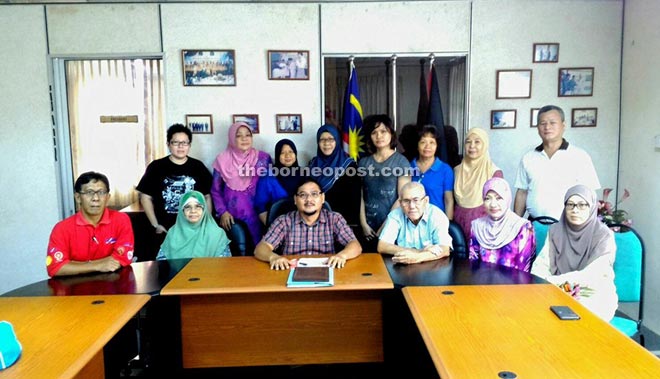 Abdul Hadi (seated third left) with tenants and other representatives during the meeting.

Miri Bumiputera Entrepreneurs Association (PBMS) president Abdul Hadi Arbie said the traders had voiced out their displeasure on the matter during a recent meeting with the association.

“These traders are currently renting commercial premises elsewhere while waiting for the (SEDC) project to take off. However, they are burdened by very high rental rates, which really hurt their business,” he told The Borneo Post yesterday.

According to Abdul Hadi, the old building has been demolished and piling works have been done at the plot of land near Jalan Melayu, which also houses Tamu Kedayan.

“There are even machinery at the site but apart from piling, there have been no other works being done,” he said, adding that the RM20-million project is funded by the federal government.

“The least that SEDC could do is to commission some more groundwork at the site. This way, the tenants would have the reassurance of seeing some progress in the project.”

Abdul Hadi also believed that SEDC should settle the new building project first before addressing the Tamu Kedayan issue, which is set for relocation.

Recently, the Miri City Council (MCC) proposed for the ‘tamu’ (farmers and produce market) traders to shift their operations to the parking area of Tamu Muhibbah, located near Wisma Pelita Miri. For this purpose, the state government has allocated RM500,000 while SEDC chipped in RM200,000.

However, those in Tamu Muhibbah were strongly against the move, stressing that it would cause massive congestion there.

“If they (Tamu Kedayan traders) come here, where will the visitors park?” one of them voiced out to the association.

On this, Abdul Hadi said PBMS suggested that the council would allocate a small section of MCC football field as a parking area for Tamu Muhibbah patrons.

“By far, this would be the most viable solution,” he added.