Sunday, October 17
You are at:Home»News»Nation»Haze regresses due to tropical storms Koppu, Champi 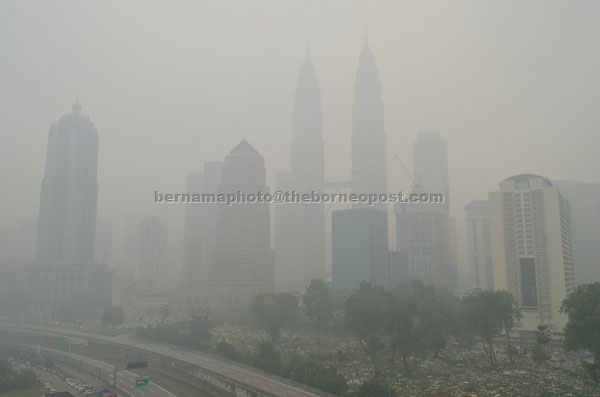 KUALA LUMPUR: The haze, which worsens again since several days ago, is caused by the tropical storms, Koppu and Champi in the Philippines which is influencing the wind pattern in the region.

She said it also brought with it the haze from the fire areas in Sumatra, Indonesia to peninsula Malaysia and the haze from Southern Kalimantan, also Indonesia, to Sarawak.

“The cross-border haze affecting Malaysia will end if the tropical storms, which can influence the wind pattern and cause dryness, dissipates or when the monsoon starts in November, she told Bernama here, yesterday.

Cik Gayah said motorists must exercise caution since the visibility currently was like driving in a moderate rain.

Meanwhile, Department of Environment (DOE) director-general Datuk Halimah Hassan said the portal apims.doe.my was disrupted yesterday morning until 1pm due to the increase in visitors to 3,000 people in three minutes.

The public could contact the DOE control room at 1800882727, if the portal is disrupted again, for information on haze, she said.

She also advised the public to reduce outdoor activities and, to wear masks if forced to leave the house, to protect against diseases due to the impact of the haze.

Other areas included Bukit Rambai, Melaka City and Putrajaya, each 154.