Tuesday, October 26
You are at:Home»News»Nation»Orangutan pair smuggled into Malaysia to be repatriated to Indonesia today 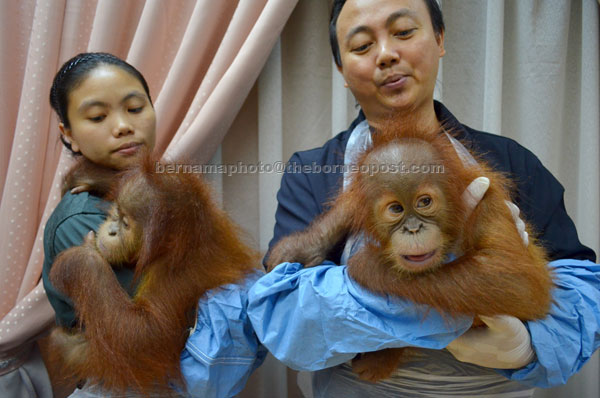 KUALA LUMPUR: A pair of young orangutan rescued under ‘Ops Taring III’ in July will be sent to their natural habitat in Indonesia today.

Both the orangutans were found on July 27 stuffed in a suitcase, believed to have been smuggled from Medan, Indonesia, and were rescued from being sold as pets here.

Four men, including two Indonesians, were arrested for possession of the orangutans without a special permit.

“The pair will undergo a rehabilitation process under the Sumatran Orangutan Conservation Programme (SOCP) at the Centre for Conservation of Natural Resources North Sumatra, Indonesia, before being released into their native habitat.

“The cost of repatriation is being borne by Indonesia while Malaysia Airlines Cargo is sponsoring the flight,” he told a news conference at his office here yesterday.

Both orangutans are from the critically endangered ‘Sumatran Orangutan’ (Pongo Abelii) species, and both their market price can fetch up to RM40,000, he said.

From 2005 up to now 15 orangutan have been sent to Indonesia, said Abdul Kadir, adding that they were constantly working with Interpol in the fight against wildlife smuggling, as it was an international issue.

“The public are advised not to engage in purchasing or selling illegally traded wildlife,” he said. — Bernama