Wednesday, February 1
You are at:Home»News»Sarawak»Rainforest World Music Festival 2016 from Aug 5 to 7
For the freshest news, join The Borneo Post's Telegram Channel and The Borneo Post on Newswav. 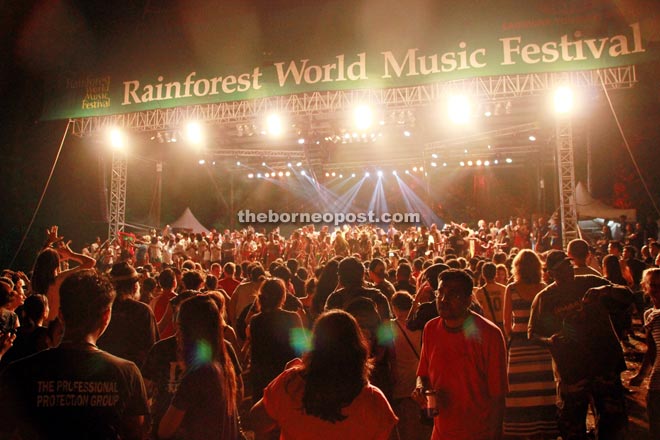 The finale of the 2015 Rainforest World Music Festival.

KUCHING: The 19th edition of the Rainforest World Music Festival will be held on Aug 5 to 7 next year, Sarawak
Tourism Board (STB) announced yesterday.

The venue will remain at the Sarawak Cultural Village in Damai.

The festival, one of its kind in the region with loyal followers from Malaysia and overseas, has been voted for five consecutive years as the top 25 World’s Best International Festival since 2011.

This year, the festival was attended by more than 18,000 music enthusiasts and based on initial profile, 69 per cent were Malaysians while the remaining 31 per cent were from outside the country.

The festival’s attractions include an interactive musical afternoon where audience and performers are able to come together to learn, understand and know about indigenous musical instruments and nightly shows staged amidst lush tropical rainforest.

Apart from the exotic music performed by different ethnic groups of people from around the world, the festival also features village marts selling and exhibiting local Borneo arts, handicrafts, tattoos and a selection of local food and beverages.

The festival updates will be available online at www.rwmf.net.

Previous ArticleTwo women shaken as car lands in ditch
Next Article PRS to field a Kenyah if it gets Murum, assures Masing