Saturday, February 29
You are at:Home»News»Court»Application for leave to appeal against ROS directive denied 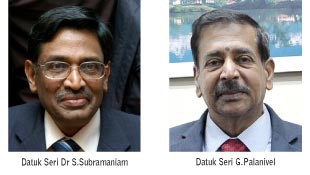 PUTRAJAYA: The Federal Court yesterday denied former MIC president Datuk Seri G.Palanivel and two others leave to appeal against the Registrar of Societies’ (ROS) directive for the party to hold re-elections after ruling that the matter was academic.

“The decision yesterday will put to rest any doubt as to Dr Subramaniam being MIC president,” he said.

In the proceeding, Justice Tan Sri Richard Malanjum, who chaired a three-panel bench, also ordered the three to pay RM10,000 to each respondent.

The others in the panel were justices Tan Sri Suriyadi Halim Omar and Datuk Ramly Ali.

The panel made a unanimous decision after hearing submissions by the both parties.

In the submissions, Datuk Seri Gopal Sri Ram, who was representhing Saravanan, told the court the issue was now academic.

Meanwhile, Amarjeet, representing all respondents, said the ROS issued the directives under section, 3A which by their nature were only concerned with how the re-elections were carried out and to ensure that only valid and qualified branches participate in the elections.

On July 13, the Court of Appeal dismissed the appeal brought by Palanivel, Sothinathan, Balakrishnan and former MIC secretary-general A.Prakash Rao.

The four are appealing against a high court ruling on June 15, which rejected their judicial review application to quash the RoS directive.

On Dec 5 last year, ROS had officially notified the MIC that its polls for the vice-president and Central Working
Committee seats, as well as some divisional elections were null and void due to certain irregularities and ordered the party to hold fresh polls for the said seats within 90 days. — Bernama