Tuesday, May 24
You are at:Home»News»Sabah»Elderly couple and son killed in fire 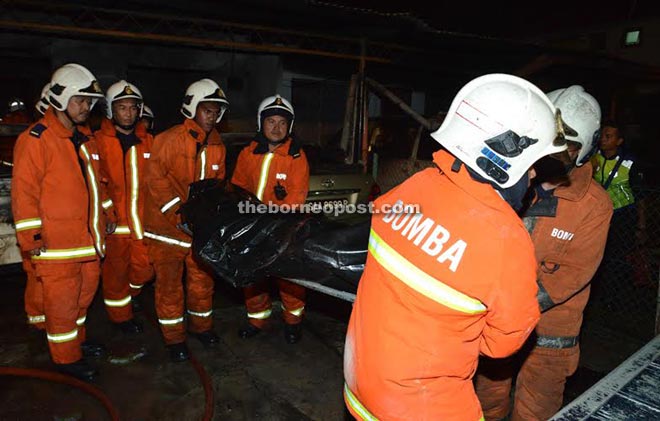 Fire-fighters carrying the charred remains of one of the victims. 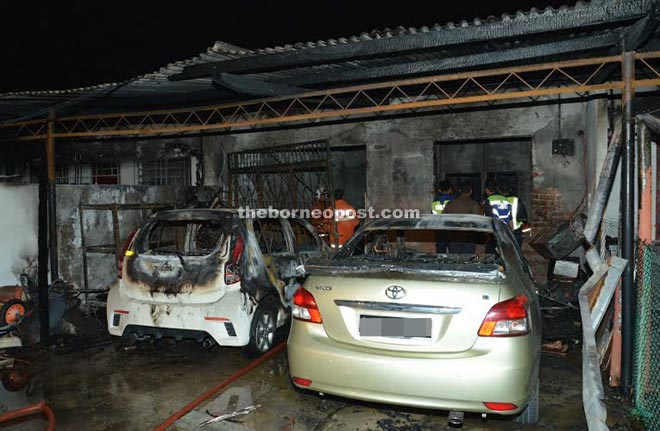 A Toyota Vios and a Perodua Myvi were also destroyed in the fire.

KOTA KINABALU: An elderly couple and their son were killed when fire destroyed their house at Taman Bunga Raya in Luyang here early yesterday morning.

The charred remains of Yong Vui Keong, 69, Chong Fui Yen, 50, and their 30-year-old son, Peter Yong, were found by Fire and Rescue Services personnel inside their single-storey terrace house half an hour after the 1am fire incident.

City police chief, ACP M Chandra, said the bodies of the deceased were found by Fire and Rescue Services personnel when carrying out investigation at the scene after putting out the fire at around 1.30 am.

“The fire-fighters immediately informed the police of the discovery and the charred remains were then taken to the Queen Elizabeth Hospital for post-mortem.

“We are still investigating the actual cause of the fire and have ruled out any foul play in the incident,” he said, adding that the deceased’s neighbours escaped unhurt.

“The fire had spread to two adjoining houses but we managed to control it. However, the middle house, where we believed the fire started, was badly destroyed.

Four vehicles were also destroyed in the fire, said Mohd Affendy, adding the cause of the fire and total losses were still under investigation.

He also served as a councillor with the Kota Kinabalu Municipal Council in the 80s and was a member of the Police Volunteer Reserve before retiring 15 years ago.

Perlido chairman Lee Seng Wan described Yong as a capable man as he successfully registered the association in mere seven months. Since the inception of Perlido, Yong had served the association and was once again sworn in as the secretary during the installation ceremony on September 19 this year.

“Yong was a good man and a rare talent. He was willing to do anything and had diligently carried out his duties.”

Yong’s wife, Chong, 50, was a committee member of Perkas,
who had been providing vehicle-related services and was commonly seen in and out of the Road Transport Department (RTD) and government departments for many years.