Monday, August 10
You are at:Home»World»Sick British Ebola nurse ‘much better’ 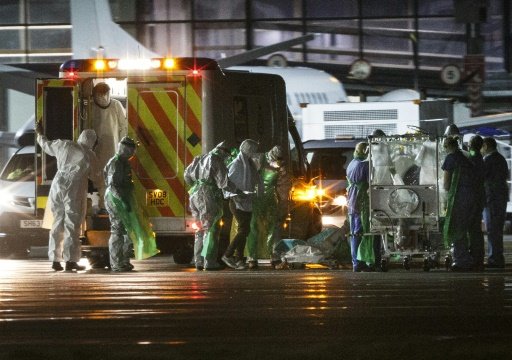 LONDON: There has been a “significant improvement” in the health of a British nurse who suffered a relapse after contracting Ebola in Sierra Leone, medics treating her in London said Wednesday.

Despite recovering from the virus in December after returning to the Scottish city of Glasgow from Sierra Leone, Pauline Cafferkey, 39, was readmitted to hospital on October 6.

Doctors at the hospital said the virus caused her to contract meningitis.

“In the last few days she’s made a significant improvement. She’s much better now,” said infectious disease consultant Michael Jacobs of the Royal Free Hospital, where she was hospitalised.

“We have no doubt… that the virus re-emerged around the brain and around the spinal column to cause this meningitis.”

On Monday, Cafferkey’s condition was “serious but stable”, after she was declared “critically ill” last Wednesday.

“I think she has a long recovery ahead of her and will be with us for quite a while still,” Jacobs said.

During her initial bout, the nurse spent almost a month in the isolation unit at the Royal Free Hospital and was treated with an experimental anti-viral drug and blood from Ebola survivors before being discharged on January 24.

After relapsing, she was treated in Glasgow before being flown by military aircraft to the Royal Free Hospital.

According to Ben Neumann of the British University of Reading, the nurse would be only the second known case of Ebola reactivation.