Wednesday, January 22
You are at:Home»Features»Drawn to cold-blooded friends 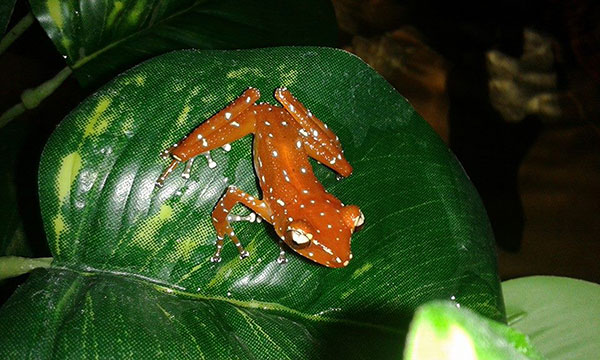 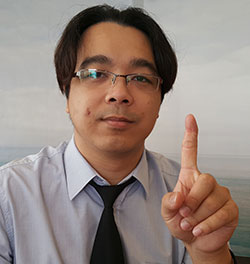 Ong shows the scar from a cobra bite on his index finger.

MAX Ong has befriended and kept reptiles, amphibians and insects as pets since he was old enough to take care of them.

He started with one snake when he was just 18.

“One day I saw a golden tree snake being kept in an aquarium in a shop in Kedah. From my observation, the snake seemed to have not been given enough food.

“Upon seeing the condition of the snake, I asked the owner if I could adopt the snake and keep it as my personal pet. He gladly gave the snake to me and I brought it home. That’s how I began to befriend snakes,” he said.

From that day, Ong started to adopt and collect more snakes caught by others until his collection reached up to 75.

The reptiles were kept in glass aquariums, with some having to be placed in his room when he ran out of space.

“So I slept with some of my snakes in the same room. That time, I was still living in Kedah.

“I kept five species, with the majority of them being dog face water snake. The rest were cobras, golden tree snakes, paradise tree snakes and red tail racers,” said Ong, who is married to a Sarawakian.

However, his friendship with snakes would come back to bite him — literally — when he was bitten by a cobra, which was about to be released.

The cobra had been caught near a neighbour’s house, but before it was released Ong had wanted his brother to touch its body.

Having handled many exotic friends, especially the golden tree species, almost every day, Ong was fully aware of what he was doing and was not the type to take chances.

Somehow it was not a good day for him and the venomous reptile bit his index finger.

“I nearly died because of that one bite. I was holding the tail of the cobra with my right hand and the head with my left hand.

“While handling the cobra behind the head, I did not realise I had stretched my left index finger to the mouth of the cobra until I felt a sharp pain,” said the 28-year-old former journalist. 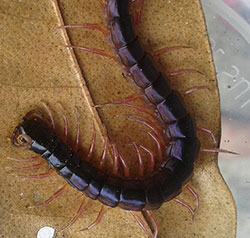 Once bitten, he immediately released the cobra and found two holes on his left index finger with blood gushing out.

Ong said while being rushed to the hospital, he started to feel the pain spreading up his left hand.

About half an hour later, the whole of his left hand was swollen.

Ong explained that things could have been worse if he did not know how to control the cobra’s venom in his blood.

“What I did soon after the bite was to hold my finger tightly for a while and release it for a while continuously. By holding it tightly, I was stopping the venom from spreading faster to the other systems, while releasing it was to enable some of the venom to spread to the parts of the hand.

“You see, if I didn’t release some of the venom, I may have had to amputate my index finger because the venom would eventually damage the tissue in the finger,” he said.

Ong said the cobra bite was really painful and because his immune system was not prepared for it, he had to stay in hospital for two weeks, surviving only on a drip.

Due to the incident, his mother decided to release all the reptiles while he was still in hospital.

A few months after he fully recovered, Ong moved to Sarawak for work.

Despite having been bitten and nearly losing his life because of it, Ong’s affinity for befriending reptiles did not end. 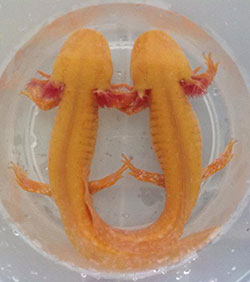 He also added amphibians and insects to his list of unusual companions.

Three years ago, he actually had 40 snakes, 30 frogs, 20 (mostly imported) geckos and more than 100 mice to feed the snakes.

All theses exotic creatures were kept in his bedroom.

Ong emphasised that the reptiles, amphibians and geckos he kept are unprotected species, adding that he is well aware of what are protected and unprotected animals in the country.

“I got the snakes and frogs from the people whereas the imported geckos were passed down to me by my friend who had migrated to Australia.

“The geckos multiplied very fast. A pair can produce 15 babies per reproduction and at one time I had 45 baby geckos in my aquarium.”

During that time, Ong also kept a few scorpions, a tarantula, a few turtles and millipedes.

Previously, Ong also collected centipedes, but mainly for other people, adding that they are buyers for this insect.

He said for him they are no fun to keep as centipedes can jump out of aquariums.

To catch centipedes, he said one can mix chicken feathers with a little bit of chicken dung in a trap.

“The feathers can keep the smell that the centipedes like. Chicken droppings will attract centipedes and give them the signal that there are chickens,” he said.

There are around seven species of centipedes in Sarawak, Ong said, adding that he has so far come across three which are blue-black, brown and purple.

All these reptiles, amphibians and insects were eventually given away or released into the wild after he got married. 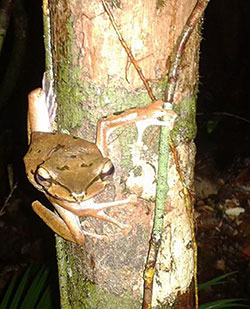 Another species of pacman frog found in Sarawak.

He said marriage and more commitments to his job and family, left him little time to care for exotic pets.

“I can’t keep these exotic pets at home any more because my wife does not share the same interest as me.

“Nowadays I prefer to go to the wild to explore the behaviour of not only the reptiles, amphibians and insect but also mammals. Together with two or three people who have the same interest and scientific background and interest to understand nature in Sarawak, we go to the jungle at night or midnight once a week,” he said.

Ong said for creatures they are familiar with, the group would monitor, photograph and collect behavioural data.

Species that they are not familiar with would be collected and sent to Universiti Malaysia Sarawak (Unimas) for scientific studies and identification.

“Out of my interest and passion for the exotic creatures, I have gone into exploration nowadays.

“I have realised the jungles of Sarawak are full of treasure. It’s safer to explore the forests here compare with West Malaysia because there are no tigers here,” he said.

According to Ong, the more dangerous animals in Sarawak’s forests would probably be the sun bear and crocodile.

Ong said snakes are not as dangerous, especially at night, unless they are disturbed or provoked, adding the reptiles normally sleep and are less active after dark.

He said more often than not, snakes do not respond by biting at night, instead will just slither away from the scene when awakened. 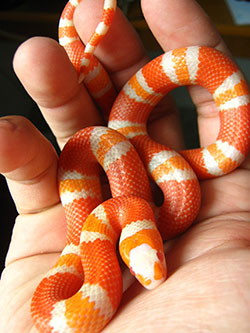 “Even during the day, snakes do not just bite. Even if they know that we are there, they are not going to fight and produce their venom, but rather choose to go away. This is because to produce the venom again, it takes weeks, and so they do not want to waste their venom unnecessarily.

“Snakes only use their venom to kill for food as a last resort or if they are provoked and disturbed and therefore to be safe don’t touch them,” he said.

He highlighted that venomous snakes make up less than 30 per cent of the 100 species of snakes found in Sarawak.

He explained that there is joy in owning certain species and having a human-animal bond.

Ong is just one of a large group of people who are really fascinated by and love exotic reptiles, amphibians and insects. 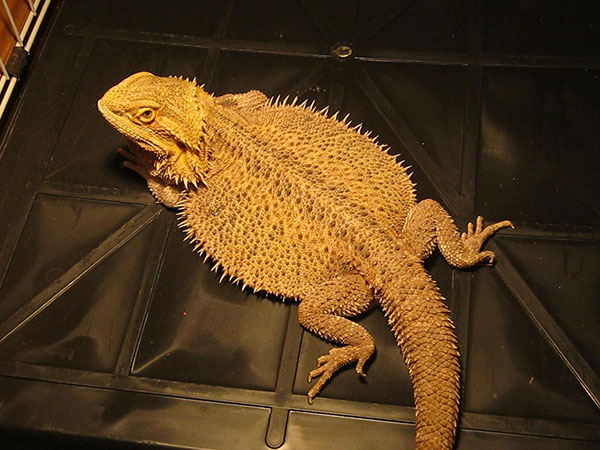 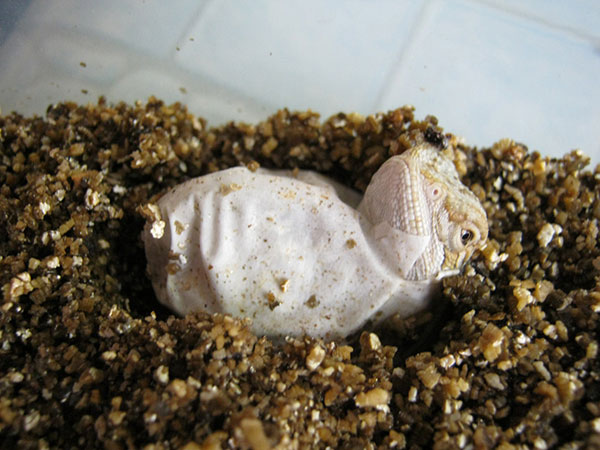 The hatching of a Bearded Dragon. 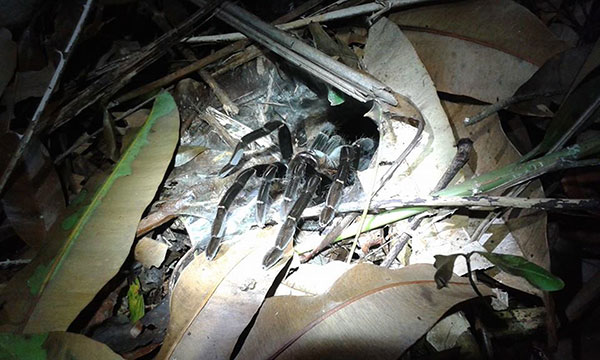