Sunday, August 14
You are at:Home»News»Sarawak»Sarawakians in KL get to meet CM 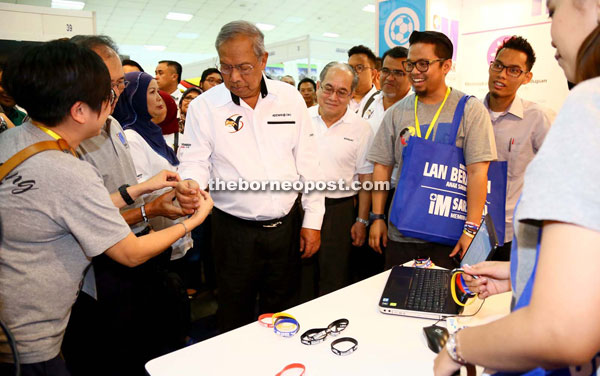 Adenan tries on a ‘hand band’ during his visit to a booth at an exhibition held as part of the Lan Berambeh Anak Sarawak 2015 programme.

KUALA LUMPUR: It felt just like home for thousands of Sarawakians comprising university students and those working and living in Peninsular Malaysia during a townhall session at Dewan Tun Razak of Putra World Trade Centre (PWTC) yesterday.

The ‘Kamek Ngan CM Adenan’ programme was the highlight of ‘Lan Berambeh Anak Sarawak 2015’ event here, which gathered Sarawakians in the peninsula and state leaders under one roof.

He maintained his witty style of public speaking that drew roars of laughter echoing inside the hall.

Prior to his speech, the session’s moderator asked the crowd if they wanted Adenan to be their chief minister for another five years. The response was a deafening ‘Yesss!’.

Adenan then took the floor, informing Sarawakians in Peninsular Malaysia about what he had done since March last year, elaborating on several policies – new and amended, and also light-hearted and serious ones – for Sarawak.

These items include ‘Don’t Call Me Beloved Chief Minister’, “Don’t Regard Sarawakians as Lain-lain (Others)’, “No Non-Sarawak Parties in Sarawak – Umno Included’, and ‘Stop Religious Bigots and Racial Extremists from Coming to Sarawak’. He named PKR, DAP and PAS as the ‘outsider parties’.

“I don’t want them in Sarawak. Who knows Sarawak better than Sarawakians themselves. I don’t claim to know Perlis, Kelantan or the other states. We can take care of ourselves, and we know how to.

“I plan to do more in years to come, but there is not enough time; which is why I’m asking for five more years. I want to do more before I retire.

“I am not asking for 33 years – I’m asking for a bigger mandate for what I have done, and not what I promise to do.”

He indicated that given a question-and-answer (Q&A) session would follow his keynote address, he did not plan to go further on his achievements.

Later, Adenan waved the pamphlet on ‘45 Principles and Actions’ to the crowd.

“You can read it,” he said. Without waiting for the moderator to begin, Adenan again said: “With me, what you see is what you get. No pretence. You are welcome to ask anything.”

The Q&A kicked off with a question prompting Adenan’s view on Sarawak autonomy, to which he said it was all about acquiring what was agreed upon by all parties during the formation of Malaysia.

“One of them was that Sarawak and Sabah would have their autonomy (on matters) like immigration, as stated under the 18 Points and 20 Points. Sarawak did not join Malaysia because there was no Malaysia to join back then,” said the chief minister, who is also Sarawak Barisan Nasional (BN) chairman.

He said he had already set up a committee to detail out on the state’s autonomy to which if Putrajaya gave its agreement in principle, the state would follow up on further action.

A Kuching-born student then asked Adenan whether Sarawak could ask for a quota set for Public Service Department (JPA) applications so that Sarawakians could stand a higher chance of being employed.

“I don’t know the answer to that question, but I will take note of it,” he said.

In response to another

question, Adenan said young Sarawakians must pursue tertiary education as he observed that many graduates with poor command in English could not land jobs nowadays.

He pointed out that those who opted for technical education would obtain employment easily, thanks to the change of trend in the job market coupled with the nation’s development.

Adenan, who is also chairman of Yayasan Sarawak, said the foundation had been sponsoring students of all races and those wishing to enter private universities.

“Yayasan Sarawak can sponsor students who want to study at private universities like Curtin and Swinburne.”