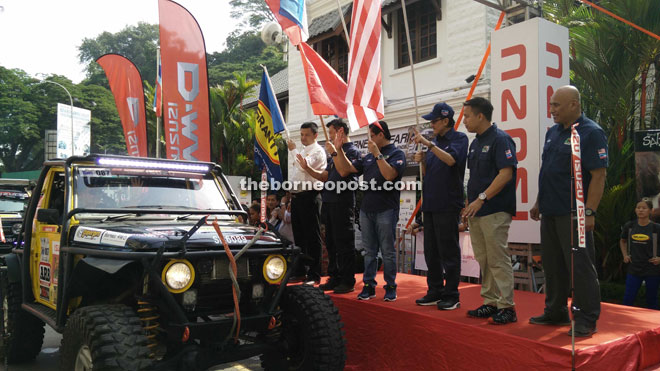 The 25th edition of the event welcomed 320 four-wheel drive vehicles with 1,198 participants from Sabah and other countries, including Brunei, Indonesia, Thailand, Japan, Australia, Ireland and France.

Looking at the response, I think this is not only an extreme product, but also possibly a product that could generate higher tourism revenue, said Tourism, Culture and Environment Minister Datuk Seri Panglima Masidi Manjun at the launch of the event.

The Borneo Safari, Asias premier off-road event took off early yesterday, with the all-conquering Isuzu D-Max leading the convoy of over 250 vehicles into Sabahs jungles where they will spend the next eight days.

This years event, the 25th in its history, will take on various obstacles primarily in the highland interior near Tenom and Keningau.

This year also marks the ninth consecutive year that members of the media will be able to depend on the trusty Isuzu D-Max to get them close to the thick of action effectively and comfortably.

For close to a decade, the media corps has been able to keep pace with the progress of the event from the cockpits of the official media Isuzu D-Max. These vehicles have long risen beyond trying to prove their abilities in the rough and instead, have established themselves as a fixture of the Borneo Safari where they are depended upon to carry out their duties effectively and efficiently, said executive director of Isuzu Malaysia Hajime Machimura.

Boasting two Borneo Safari Vehicle of the Year titles under its belt having performed outstandingly as a standard vehicle, the Isuzu D-Max derives its strength and capability from the DNA inherited from its truck brethren.

It features a tried and tested iGRIP design platform that affords the Isuzu D-Max with outstanding stability, handling tilt angles of up to 49 degrees comfortably while its engines amazing torque delivery at low rpm ensures superb traction and hill-climbing ability, key features of a good 4×4 vehicle.

This years Borneo Safari will once again feature three units of the Isuzu D-Max leading the media convoy, one 3-litre and two 2.5-litre models.