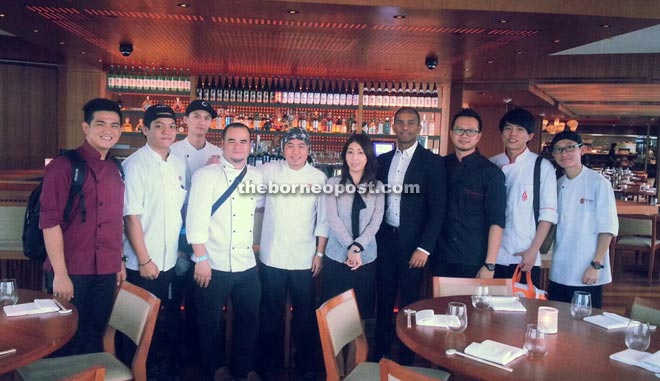 Nobu has been offering a unique blend of contemporary Japanese cuisine infused with Latin American flavours since 1994, said a press release issued by UCSI yesterday.

UCSI Kuching Campus lecturers also managed to meet alumni who are currently working at the restaurant.

Gavin Naoki Danna is currently a sushi chef, Aaron Yii Sze Kiep is a service personnel while Ngui Wee Kwong, who has always dreamt of becoming a mixologist, is now a bartender in Nobu KL.

According to Nobu KL executive chef Philip Leong, students from UCSI University who are either undergoing their industry placement or working there are doing very well.

“They are willing to learn and are responsible in carrying out the tasks given to them,” Leong said.

He also mentioned that the restaurant is looking for more students from UCSI and are giving them priority for industry placement at their restaurant.

“I feel honoured with the fantastic comments given to our students. It is very rare for a high class restaurant like Nobu to take in trainees. “With the recognition from Nobu, I am looking forward to engaging more high class restaurants for collaboration in terms of accepting students for industry placement there for more exposure,” said Joseph.

UCSI University is committed to exposing its students to local and foreign experiences through its industry placements or co-operative placements at companies around the world.

In a recent study, UCSI is rated as one of the top five universities in the area of graduate employability with 81.40 per cent of its students being offered jobs before they even graduate.

To date, the university students have done their internships in countries like Japan, New Zealand, Macau and Singapore, to name a few.

Students who are interested in furthering their studies in Medicine and Health Sciences, Pharmacy, Architecture, Engineering, Social Sciences and Applied Science programmes, CPU in Sarawak Campus enables them to study their Foundation Studies both in Arts and Science.