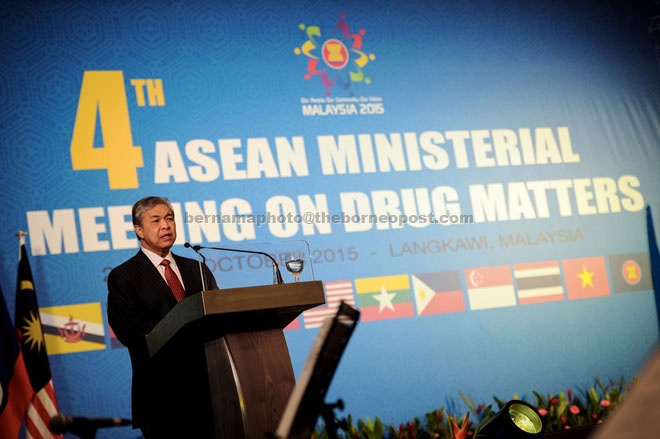 LANGKAWI: Asean nations have recognised the target for the region to be freed from the threat of drugs by this year is a mirage or illusion, said Deputy Prime Minister Datuk Seri Dr Ahmad Zahid Hamid.

Zahid, who is also Home Minister, said Asean must conceded that the target outlined in the Asean Ministerial Meeting on Drugs (AMMD) in 2008 failed to achieve its aim.

“The reality that has to be faced is the problem of drugs (drug-free target) does not have a certain timeline established and should have long-term measures,” he told a new conference after chairing the fourth AMMD here yesterday.

According to him, Asean nations recognised that the fight against drugs were very difficult and required not only harsh statements but effective action.

“Every harsh statement but no action (is not necessary). All statements from each Asean country must be followed by action and Asean Secretariat should monitor the actions being carried out,” said Ahmad Zahid.

Even though the political will of the Asean countries to see the region free from drugs is very strong, it will not work if drug syndicates continue to fulfill market demands.

He said all parties, either the anti-narcotics police or other enforcement agencies, had done their best but still not good enough to solve the problem.

“Asean countries must not be day-dreaming, this problem should be taken more seriously,” said Ahmad Zahid, adding that he could see the closeness among Asean countries to combat the international drug trafficking syndicate.

He said the meeting congratulated the Mekong basin countries, which have been taking initiatives to improve the development level in the area and liberate the people from the grip of poverty and poppy cultivation.

Ahmad Zahid said the move to provide alternative crops to farmers in the Golden Triangle from poppy to kenaf or jute would also help efforts to tackle drug problems in the region.

Efforts by Mekong basin countries by taking proactive steps to change the perception and make the area a development valley are most welcome, he said. — Bernama