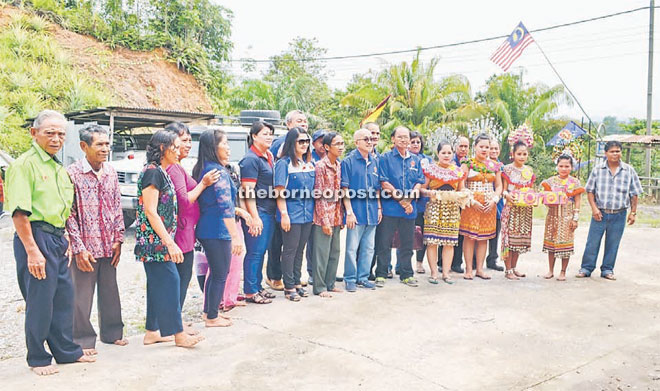 LIMBANG: Sarawak Progressive Democratic Party (SPDP) is intensifying its outreach programmes in Batu Danau constituency as part of its state- wide strategies to ensure that its candidates win in all seats allocated by the Barisan Nasional (BN) in the forthcoming state election.

accompanied by exco members had on Monday visited two villages in the constituency to explain to the people, the party’s stand and determination to defend Batu Danau constituency whose incumbent Paulus Gumbang had joined the newly formed Parti Tenaga Rakyat Sarawak (Teras).

The first of its meet-the-people session was held at Rumah Manai Awing in Merutup where representatives from five nearby villages namely Sateng, Kalat, Tegong, Sintau and Kasim also attended.

Later, he proceeded to Rumah Labat Lenggang at Kampung Ukong to meet the villagers and those from Beti longhouse.

According to Xavier Ginafah Sidop, SPDP Batu Danau secretary, Dr Mohd Syafiq was happy with the overwhelming response from villagers to their visits, seen as golden opportunities to hear first hand information from party leaders and channel their wishes and aspirations.

“We are honoured to host the visit by Dr Mohd Syafiq and entourage.

Your visit to our village brings new hope for the people to continue having fair share of development projects from the government.

Topping out list are clean water and electricity supplies and tar-sealed road network,” said Manai Former councillor and vice- chairman of SPDP Batu Danau Jostly Umpi Agong disclosed that villagers in 20 longhouses under him are strong supporters of SPDP and BN.

“SPDP is still relevant in championing the cause of the people here.

Although majority are Iban, the people are united and assured their strong support to any BN candidate for Batu Danau,” he said.

Meanwhile, Tuai Rumah Labat was overwhelmed that Dr Mohd Syafiq who hailed from the same village also led party members to revisit the village, adding that it augured well in reinforcing solidarity among the Bisaya community.

Labat is optimistic that the people are wise enough to continue giving strong support to the BN candidate and the ruling government that have proven its track records in bringing development and ensure peace in the state.