Monday, April 6
You are at:Home»World»Israel charges Palestinian, 13, with attempted murder 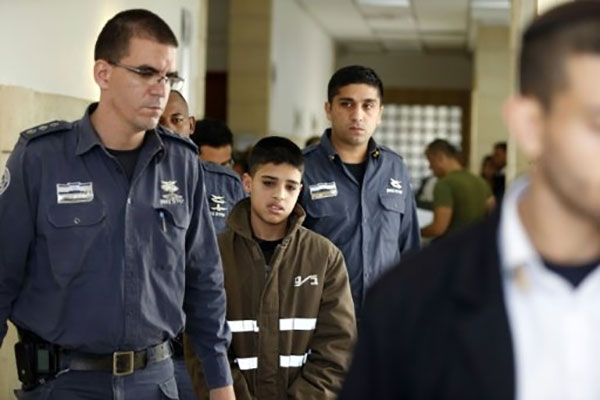 Ahmed Manasra (C), a 13-year old Palestinian accused of taking part in the stabbing of two Israelis earlier this month, is escorted by Israeli security during a hearing at a Jerusalem court on October 30, 2015. – AFP Photo

The incident, on October 12, involved not only Ahmed Manasra, but his 15-year-old cousin, Hassan, who was shot dead after the second attack.

The two had left school and talked “about the situation at the Al-Aqsa mosque compound, that of the residents of Gaza, about the Palestinian Authority and Hamas, and decided to become martyrs… and to stab Jews”, a ministry statement said.

They allegedly went home, got knives, headed to the Jewish settlement of Pisgat Zeev and stabbed a young ultra-Orthodox Jew twice before he managed to escape.

They then accosted a 12-year-old who was on his bicycle, stabbing him four times, before running away.

Ahmed was hit by a car as they fled, and Hassan shot dead by Israeli security forces when he allegedly threatened them with a knife.

Israel, Jerusalem and the Palestinian territories have been gripped by a surge of violence, with nine Israelis killed in a spate of knifings and shootings this month.

Sixty-three Palestinians and one Israeli Arab have also been killed.

Tensions soared over the status of the Al-Aqsa mosque compound in east Jerusalem, a holy site revered by both Muslims and Jews.

Palestinians accuse Israel of seeking to change the rules that allow Muslims to pray there, but not non-Muslims.