Wednesday, January 29
You are at:Home»News»Sarawak»Longboat races to feature in Simunjan Fest 2015 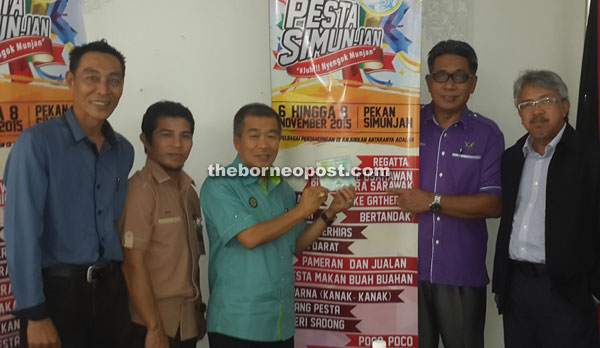 KUCHING: After a 20-year absence, longboat races will once again be featured in the coming Simunjan Festival this year.

This was revealed by Simunjan assemblyman and Assistant Minister in the Chief Minister’s Office (Bumiputera Entrepreneur Development) Datuk Mohd Naroden Majais during a press conference at his office yesterday.

Naroden said he was certain that the Simunjan locals are as excited as him in anticipating the water sports to be held along Batang Sadong once again after a long lapse.

“Although there are other water sports games and races constantly featured in this festival throughout the years, no longboat races were ever organised since 1995. I am glad the longboat races will finally return and be featured once again in the festival this year,” he added.

One of the reasons why the longboat race was not held over the last 20 years was because of the erosion along the river banks at the Simunjan Town waterfront.

Now that the races are back, Naroden hoped that it will attract many boat race enthusiasts apart from attracting more visitors to Simunjan during the festival.

The Simunjan Festival is scheduled to be held next week from Nov 6 to 8 and water sports will be the festival’s main feature.

A total of 185 participants have registered to compete in either one or more of the water sports scheduled during the festival including the longboat races.

“There will be many other activities apart from the water sports and I hope that everyone from all around will come to Simunjan during the Simunjan Festival as organisers have promised an exciting atomosphere for the public during the three-day event. It will be packed with entertaining activities,” he said.

Renowned local singers will entertain visitors to the festival at nightly stage shows.

During the press conference Naroden took time to praise the Simunjan and Samarahan locals for their hard work and co-operation in making sure the festival become a success this year.