Friday, October 7
You are at:Home»News»Sarawak»Couple terrified to find themselves in ageing aircraft 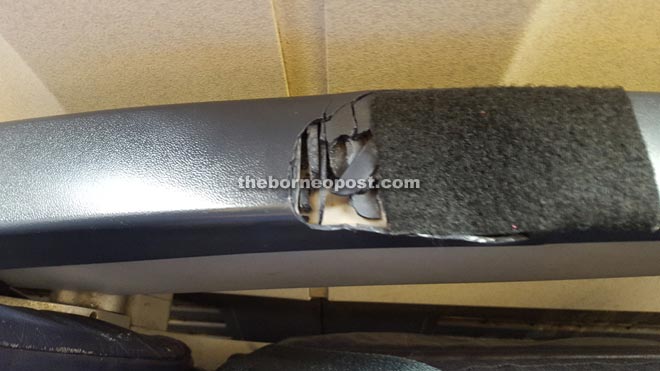 The damaged arm rests were allegedly taken onboard the aircraft on Oct 25.

KUCHING: A two-hour flight felt like eternity for a married couple bound from Kuala Lumpur to Sibu on Oct 25.

In an email written to The Borneo Post, the passenger, known as Wong Ching Yong, described the Boeing aircraft as looking very old and in need of maintenance.

“While I was waiting at the departure lounge, I could see that the aircraft was a very old B737-800. It really looked old as we were walking towards it via the aerobridge,” Wong wrote in his email.

He also said upon boarding, he queried the crew, who admitted that the aircraft was indeed “very, very old” but had a reliable safety record.

“Their reply made my heart sink. I felt like walking away, but my wife said as Christians we should leave our destiny to the Lord.

“I must confess that my wife is indeed a brave woman and has much stronger faith than me,” he added.

Once onboard, they discovered that the arm rests of their seats were different from the normal ones.

“Many passengers on board whose arm rests were also damaged were equally horrified by the sloppy repair work, which was unacceptable for a premium airline,” he commented.

Wong and other passengers were worried if the sloppy repair and maintenance work on the inside of the aircraft reflected the condition of its engines.

The airline, he pointed out, should be more responsible in maintaining their aircraft in view of the number of aircraft crashes worldwide.

Wong also sent an email to the airline asking for clarifications.

But as at press time, no reply was received from the airline’s Public Relations unit.