Tuesday, June 15
You are at:Home»News»Sarawak»Ancient cave found in Mulu

It is not named yet, but Adenan is confident its discovery will boost state’s tourism 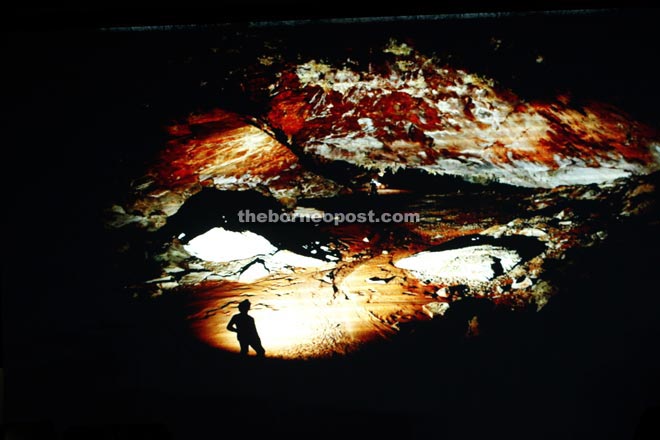 A beautiful shot of the newly discovered cave in Mulu. It was shown after Adenan made the announcement last night. — Photo by Chimon Upon

Another view of the majestic cave. 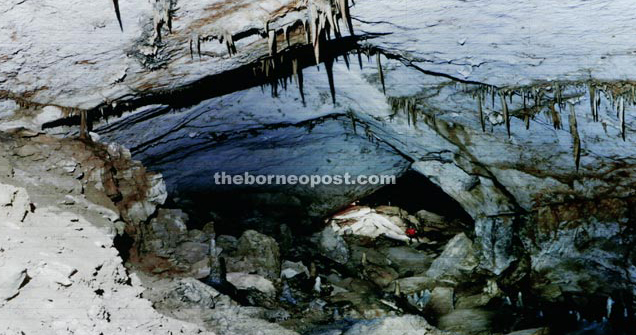 An image of the newly discovered cave in Mulu being shown after Adenan’s announcement.

KUCHING: A new cave, estimated to be around six million years old, has been discovered within the Mulu limestone system.

“I have some good news to tell you. We have discovered one more beautiful cave in the Mulu system. We have Deer Cave, Clear Water Cave, King’s Chamber, and now an additional one—some distance from the present Mulu.

“We cannot name it now because the tradition is that we name it after the person who discovered it. This cave is about six million years old. For the first time, human beings in six million years set foot on this cave. So, I think that is another feature for Sarawak,” he said at Sarawak Forestry Corporation’s (SFC) 12th anniversary dinner here last night.

However, when met by reporters later, SFC chief executive officer Wong Ting Chung said the new discovery, which was confirmed about three weeks ago, had already been named ‘Conviction Cave’

He said ‘Conviction Cave’ was discovered by explorer Andy Eavis from the United Kingdom. According to Wong, Eavis has been carrying out expeditions in the Mulu region since 1977.

He added that the new cave was practically untouched and the layers said a lot about its age. On the significance of the new cave, Wong said: “No human has set foot on it before. It is very rugged and makes it difficult to get there.”

He added that the layers of limestone of the cave remained untouched for centuries, which made it very significant.

“Scientifically, it is a significant discovery. It is now up to scientists and the state government how we want to go from there, whether to make it an eco-tourism product or something else.”

Meanwhile, Adenan believed there were more caves in the region that had yet to be discovered. He was also confident the newly discovered cave would augur well for the tourism industry.

On a related matter, he called upon all to regard the state’s forests as a treasure instead of just treating them as a means to bag more profits.

“I want people to look at our forests as naturalists and not just getting timber out of it and seeing dollar signs.”

Noting that natural forests and tropical forests in many parts across the world were gravely depleting, he said he did not want to see the same phenomena happening in Sarawak.

“The rate of depletion of tropical forests in other parts of the world is terrifying. I do not want that to happen here. The sooner we stop it the better it is.”

On the state’s national parks (NPs), Adenan said he had come up with the latest policy that they be open to everyone.

He added it would make no sense for the state to conserve NPs and not let the general public see any of them.
“Our national parks are open to the public. They can see them for themselves. I know some forest officers complained about damage, but it is your job to see that no damage is done.”

He lauded SFC for its efforts in eradicating illegal logging throughout the state. He even half-jested, “When I read the newspapers, coming across headlines like ‘Illegal timber seized’, I am happy. It is very pleasant news to me.”

He added that “there is no more mercy this time” when it came to combating illegal logging activities.

More than 30 sawmills had been shut down since the state government committed itself to the on-going campaign, he said, adding that the `Big Six’ timber corporations had also been warned of not involving themselves in illegal activities, lest their licences be revoked.

“Generally, I am happy now with the way SFC is doing the job. To summarise, you have done a good job, and I hope you will continue to do the same and continue to do better.”