Friday, August 6
You are at:Home»News»Sarawak»Fishermen brace for monsoon season 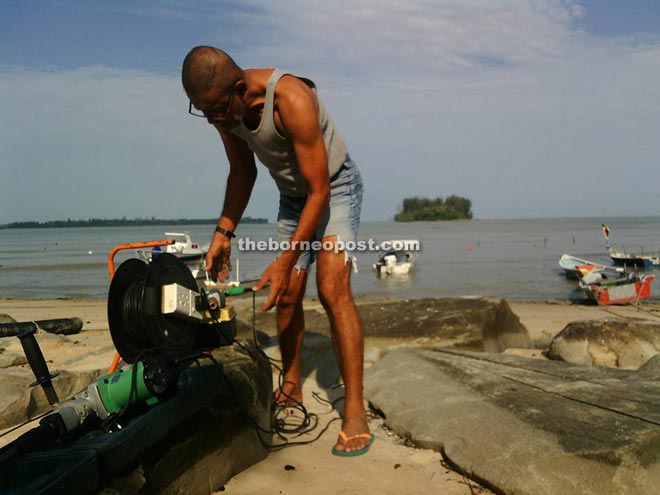 Piruz uses his tools to fix his fishing equipment by his seaside home at Kampung Pasir Pandak.

KUCHING: Local fishermen are bracing for stormy weather as the monsoon season sets in.

Former navy officer Piruz B Macpherson, who is passionate about life at sea and fishing, said many of them were now looking for alternative jobs to supplement their income from the sea.

“Some of the brave and experienced fishermen with big boats and engines will overcome the big waves and get their catch, else they have to resort to catching river crabs or fish like sea catfish (Ikan Sembilang) at the river mouth,” the fisherman told The Borneo Post when met at his seaside home at Kampung Pasir Pandak here yesterday.

“Local fishermen are now generally getting less income, especially those around coastal areas compared to before, even though we have the right fishing gear and equipment,” he added.

The reason, Piruz pointed out, could be due to the environment, over-fishing by local and foreign fishermen, the use of wrong fishing nets and development in coastal areas.

“Not only that, the monsoon is not helping for the next few months especially for local fishermen or even for anglers who love fishing,” he said.

He added that these factors would make it difficult for making fishing a sustainable source of income, and fishermen might one day resort to other occupations.

“Not everybody will be lawyers, doctors and engineers. Fishing is still a lucrative income earner. I hope one day fishermen here will become modern and professional and this industry will flourish,” he said.

He said since he settled at the village, he felt comfortable and had made many friends.

“We often sit together and discuss how to get a good catch but during this stormy weather we are helpless and need alternatives. Many resort to odd jobs in the area,” he lamented.

He pointed out that others had to find other jobs like construction work and collecting fruits to make ends meet as there were fishing equipment to repair and bills to pay.

“Life will definitely come to a standstill for fishermen as the monsoon season is coming and the three or four months of bad weather is a very long wait,” he added.

“I know of a neighbour who ate rice broth mixed with eggs for his meals during this time,” he disclosed.

He said he is proud to be a fisherman as they contributed to the progress of the country through the fishing industry.

“The government is fair and optimistic of our profession but we hope that they do not forget the stormy months faced by the fishermen in the state,” he said.

He hoped in the future the government would construct a wave breaker at the mouth of the river so that boats can go to the sea during the monsoon season.

“However, this adage will not be in the mind of many fishermen of Kampung Pasir Pandak for the moment as the monsoon season is coming,” he added.

There are 65,000 registered fishermen across Malaysia.