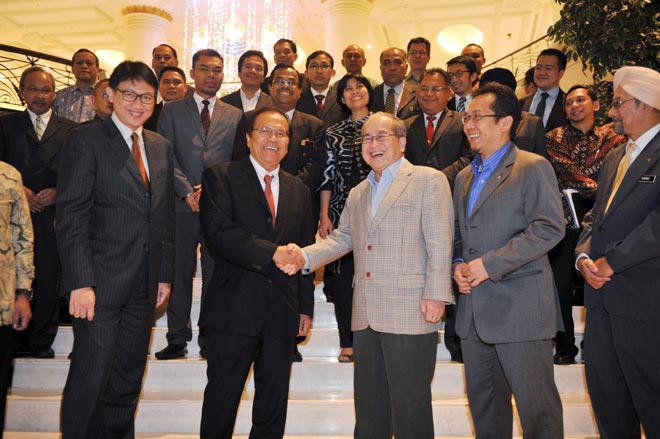 Uggah (fourth left) welcomes Rizal and the Indonesian delegation to the Ministerial Meeting on the establishment of the CPOPC yesterday. — Bernama photo

PUTRAJAYA: Malaysian and Indonesian ministers met here yesterday to finalise the memorandum of understanding (MoU) on the establishment of the Council of Palm Oil Producing Countries (CPOPC).

Malaysia’s Plantation Industries and Commodities Minister Datuk Amar Douglas Uggah Embas led the Malaysian delegation to the Ministerial Meeting on the establishment of the CPOPC while Indonesia was led by its Coordinating Minister for Maritime Affairs, Rizal Ramli.

A joint statement released yesterday said the two countries would be the founding members of the council.

“Membership in this council will be open to other oil palm cultivating countries,” it said.

Malaysia and Indonesia had agreed to establish the CPOPC during a meeting between Indonesian President Joko Widodo and Malaysia’s Prime Minister Datuk Seri Najib Tun Razak in Bogor, Indonesia on October 11 this year.

The statement said the scope of the council includes promoting consultation on the development of the palm oil industry among stakeholders in the oil palm cultivating countries; enhancing the welfare of oil palm smallholders; and developing and establishing a global framework of principles for sustainable palm oil.

It also includes promoting cooperation and investment in developing sustainable and environmentally-friendly oil palm industry zones, including green economic zones; addressing impediments to palm oil trade; cooperating in research and development and training; as well as undertaking activities and functions as may be deemed desirable in the interest of the palm oil industry. — Bernama