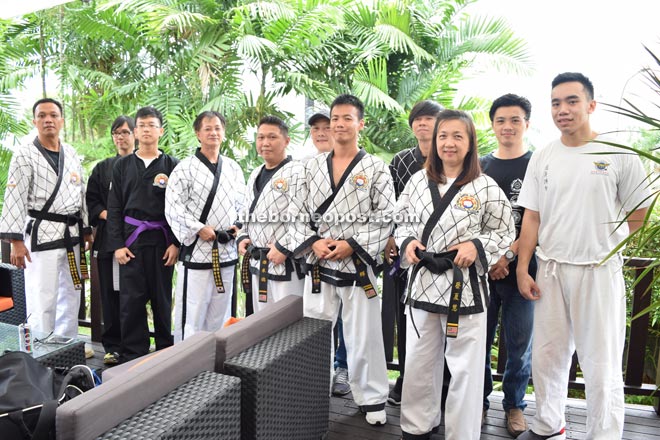 Jong (fourth left) and his students at Sarawak Club.

According to seasoned Hapkido practitioner Jong Nyan Chong, the moves and techniques in ‘Hosinsool’ are sensible and less strength-consuming, making them highly practical for women to defend themselves.

“Hapkido itself is very practical – you don’t have to use a lot of strength. Hosinsool, in essence, is still Hapkido but it focuses more on defence,” he told The Borneo Post when met after a 30-minute Hapkido demonstration performed by his students at Sarawak Club near Jalan Taman Budaya here recently.

The session was conducted in conjunction with the club’s ‘Family Day’. Jong, who is founder and head instructor of Hapkido Martial Arts Academy, noted that people nowadays were becoming more and more unaware of the importance of self-defence

“Many assume that if they’re doing martial art sports, they are learning self-defence. Actually, they are not. Hapkido is a martial art that purely emphasises on how to terminate threats. Through it, practitioners learn about identifying weak points, vital spots and soft targets on the human body – making it easier to take an opponent down without using a lot of strength.”

Additionally, Jong said this branch of martial arts could be beneficial to one’s fitness, endurance and level of stamina.

“It also helps you get rid of body fat. Overall, learning martial arts benefits you in more ways than one. You’re able to protect yourself through self-defence and at the same time, it makes you healthy. It also boosts your willpower and confidence.”

On his credentials as a Hapkido trainer, Jong said he began as a hurdler – another field that he excelled at. He made the country proud by bringing home a silver medal in the 400m hurdle at the 1981 Manila SEA Games in the Philippines.

However, his current passion is Hapkido and he strives to impart his knowledge in the martial art to his students at his academy near Jalan Pending here, which was established in the early 1990s.

Previous ArticleKota Kinabalu offered as port of call to chinese naval ships – RMN
Next Article Lee: Students must be all-rounders too