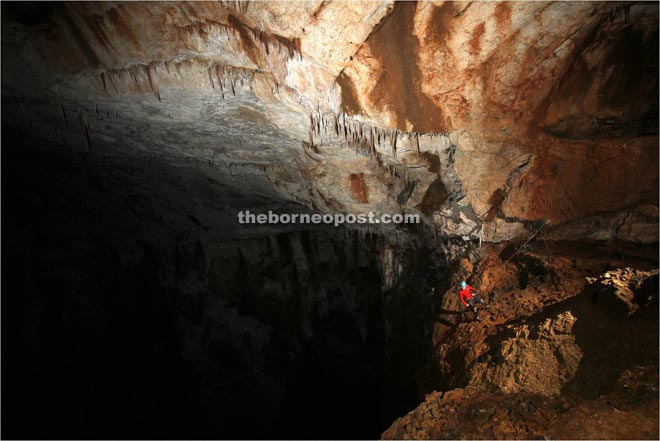 A caver at the edge of the 100-metre sheer drop.

Its chief executive officer, Wong Ting Chung, said in a press release yesterday that the expedition was the latest of a series of similar caving expeditions carried out since the Royal Geographical Society Expedition in 1977.

He added that true to convention, while the Chief Minister had honoured the discovery by announcing it to the world last Friday during SFC’s 12th anniversary dinner, the prerogative of naming the new cave belonged to the discovery team led by Andy Eavies.

Meanwhile, an SFC member of the expedition team, Rambli Ahmad, said the name ‘Conviction’ was selected for the new cave as the team members were utterly convinced that there was a major cave in the area of the search despite the lack of any indication that this would be so.

“As things turned out, there was a ‘superb world class’ cave just beyond a seemingly inconspicuous hole in the ground,” said Rambli.

“As of now, we only have preliminary information and statistics on the cave. We have documented thus far 3.2km of spectacular passages, avens, and pitches, one of which has a sheer drop of over 100 metres—leading into a vast chamber that could well be amongst the top 20 largest in the world.

“This find further supports the long held belief that the Mulu Cave Complex contains invaluable historical records and geological information dating as far back as six million years about Earth.”