Friday, August 19
You are at:Home»World»Russia’s Putin vows to punish those behind Sinai plane ‘terror’ attack 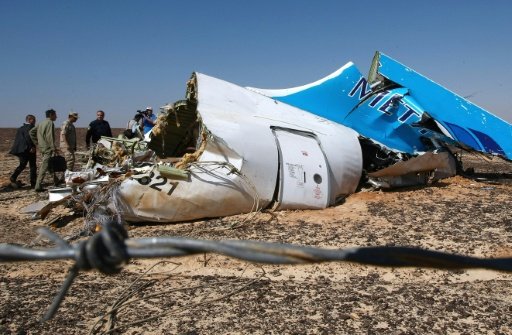 The crash site of the A321 Russian airliner in Wadi al-Zolomat, a mountainous area of Egypt’s Sinai Peninsula, on November 1, 2015 – AFP Photo

MOSCOW: Russia’s President Vladimir Putin vowed to find and punish the attackers who brought down a plane with 224 people on board in Sinai last month, in remarks released by the Kremlin Tuesday (Nov 17).

“We will search for them anywhere they might hide. We will find them in any part of the world and punish them,” Putin told FSB security chief Alexander Bortnikov late Monday, calling the attack “one of the bloodiest crimes”.

Russia’s security chief told Putin the was downed due to a “terror attack,” the Kremlin said on Tuesday.

“One can say unambiguously that it was a terror act,” the head of the FSB security agency, Alexander Bortnikov, told Putin in a meeting the day before.

Citing experts, he said the plane disintegrated in midair due to a bomb with the equivalent of a kilo of TNT.-AFP