Friday, October 23
You are at:Home»News»Sabah»Nurul meeting with Kiram ‘offensive’ 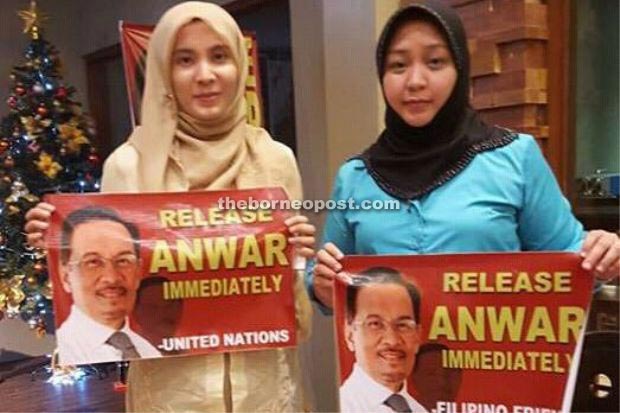 Nurul Izzah (left) posing with Jacel Kiram in the Philippines.

KOTA KINABALU: United Pasokmomogun Kadazandusun Murut Organisation (Upko) said the action by Lembah Pantai MP, Nurul Izzah to meet Jacel Kiram was offensive to the respective families of the Tanduo and Semporna incursions and to all Sabahans.

Its secretary-general Datuk Donald Mojuntin asked: “What was Nurul doing mingling with Jacel Kiram, who was the spokesperson of the father, the late Jamalul Kiram III, who wanted to wrest Sabah from Malaysia by force of arms?

“This so-called royal Sulu family has Sabahan and Malaysian blood on their hands. For us Sabahans, it seems that by this act of ‘friendship’ with the Kiram family, PKR and DAP are showing how little they think of the sovereignty of our country and how insensitive they are to those who died defending against the incursions by these people and those who died at the hands of kidnappers.

“We arrest people who talk about secession and go hard on people like Doris Jones but we have here, a family from another country, organising an uprising in Sabah and some of our lawmakers are on friendly basis with them.

“It is no wonder that there is a rising perception that the opposition will go to any length to achieve its political ambitions.

“Nurul may say that she was a guest at the event. However, she is posing for pictures with this Jacel with a placard demanding Anwar’s release. There appears to be no sign of stress or distraught on her face. She seems perfectly happy to be there.

“So genuine Sabahans cannot be blamed for thinking that Sabah’s security is of little concern to people like Nurul and Tian Chua,” he said.

Meanwhle, SAPP president Datuk Yong Teck Lee said that such a meeting was highly offensive to Sabahans because Jacel has made the “Sabah claim” her main campaign agenda.

“Not only that, Jacel was the main spokesperson for the Kiram-led armed intrusion at Lahad Datu in 2013.

“Many innocent lives were lost, Sabah villagers were displaced and our security forces suffered fatalities. Even now the adverse economic impact on the Sabah economy, especially east coast, is still being felt,” Yong told The Star Online yesterday.

The former chief minister said Jacel’s campaign (to claim Sabah) was widely known and there was no way that Nurul, who is PKR vice-president, and her colleagues were not aware of her campaign.

“Therefore, Sabahans are deeply offended, even disturbed, by Nurul’s apparent support for Jacel.”

Pictures of Nurul Izzah together with Jacel caused an uproar as many questioned why Nurul Izzah would meet with someone whose late father Jamalul Kiram III ordered 200 of his ‘Royal Sulu Army’ to invade Sabah in Feb 2013.

In one picture, Nurul Izzah was seen having dinner with Jacel and an unidentified man while in two other pictures, she posed with Jacel holding a ‘Release Anwar Immediately’ poster.

She has defended her meeting with Jacel, saying that it was arranged by the Filipino authorities.

Nurul Izzah said she had gone to the Philippines on Nov 9 with Batu MP Tian Chua, as part of the party’s delegation to meet political stakeholders in the country.

According to her, the people she met were legitimate stakeholders and civil society leaders.