Wednesday, January 29
You are at:Home»News»Nation»Obama urges region’s youths to stand up to violence, extremism 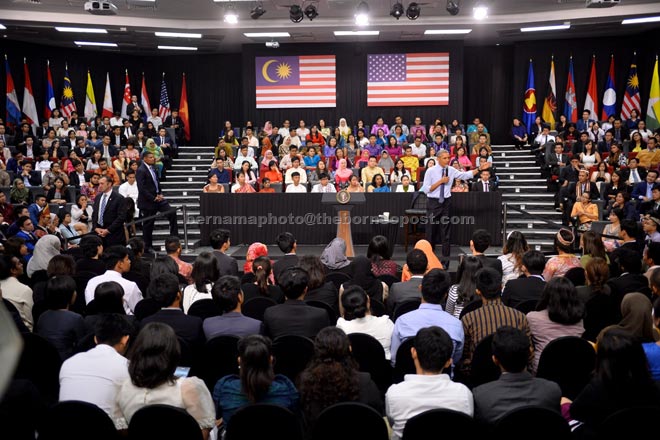 KUALA LUMPUR: In the wake of the deadly attacks in Paris, United States President Barack Obama yesterday called on youths of Southeast Asia to set an example by standing up together against violence and extremism.

In facing the challenge, he said, young people in the region should hold more interfaith dialogues towards nurturing tolerance and embracing cultural differences.

“A lot of us have been thinking about the attacks in Paris and about the terrible vision of those who carried out the attacks. And you contrast that with young people who are represented here, who build things and help each other.

“Set an example to not only stand up to violence and extremism, but build interfaith dialogues, promote tolerance and appreciate the culture and vision of each other,” he said.

Obama, who arrived in Malaysia yesterday to attend Asean-related meetings, was speaking at a townhall meeting with youths under the Young Southeast Asian Leaders Initiative (YSEALI) at a private university in Subang Jaya near here.

According to Obama, building interfaith dialogues and promoting tolerance were among the values propagated by YSEALI which had more than 55,000 members across the region, and was growing, since its inception two years ago.

YSEALI connects leaders from across the region and offers an array of resources, online networking opportunities and professional training.

In line with YSEALI aspirations, Malaysia was commended by Obama over its partnership with the United States Peace Corps in serving underprivileged communities in Malaysia.

“Because of all the challenges and the threats the world faces, I am absolutely confident
young people like you with passion and drive and commitment can make a difference,” he said. — Bernama

Previous ArticleCompanies need to meet standards to reach bigger market under TPP
Next Article Najib: No place for violent extremism in Asean