Wednesday, January 26
You are at:Home»News»Sarawak»Chan takes Yong to task over illegal carpark 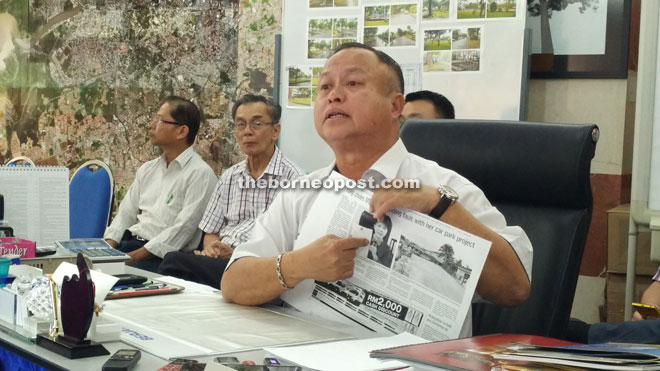 Chan pointing to a newspaper printout in rebutting Yong’s allegation.

Responding to the allegation at a press conference yesterday a clearly upset Chan stressed that the carpark proposal
was rejected mainly because the open space, which was a state land, was now deemed unsuitable to be turned into a carpark unlike when it was suggested in 2006.

“I wasn’t the mayor in 2006 when the council suggested that the plot of land could be turned into a carpark to accommodate 12 vehicles. I was only appointed and took office in 2008,” he explained.

He added that he had responded to Yong’s complaint and application.

More importantly, Chan revealed that investigation had shown that the plot of land can no longer fit 12 cars because someone had opened up a private entrance into their house which was also illegal.

“If a public carpark is to be built, it will obstruct the entrance of that particular house and so the available land could only
fit six cars but we have rejected the proposal due to safety and social reasons,” he elaborated.

Chan slammed Yong for taking things into her own hands without respecting the law by building the carpark for the residents using her own money.

“As an elected representative who is part and parcel of the state legislative to make laws, YB Yong instead has broken all kinds of law due to her initiative.

“Every citizen is bound by the law and she is no exception. How can she just ‘gasak’ (push through) her way through without respecting the law?”

He said Yong should have appealed to higher relevant authorities instead of encroaching into state land.

Chan also pointed out the problem of maintenance and safety issues that ensue as no engineering plan was submitted for approval.

“Now who is going to maintain this carpark that will see crack and tear in due time? Who is going to ensure the safety of the users and surrounding homes and its residents?”

Chan has written to the state government and alerted relevant authorities including Land and Survey Department over the matter and is now waiting for decision on what actions to pursue.

Acting city engineer of MBKS Vincent Ang through a slideshow showed the various problems of the carpark construction would cause including endangering lives of public and residents as well as possible flash floods.

“The carpark is built nearly 3 feet higher from the surrounding residential houses and too near to the house fencing with no curb or barrier. There is no engineering plan for safety compliance,” he said.

“We don’t know where the water going to escape when it rains or will it affects the nearby houses. Plus this is only a very small plot of land that could be quite difficult even for 6 cars to move around and park,” he added.

Member of the Standing Committee for Traffic and Works Councillor Dom Silang explained that the two main reasons to refuse the proposal were to prevent disputes among neighbours on the use of the open space and safety.

Chan reiterated that MBKS never allowed politics to influence their decisions for they were all committed to carrying out their work and responsibilities according to the law.

“Our decisions in addressing people’s issues and problems are people-centered and political aspects will not be taken into consideration,” he emphasised.

“We look into a problem by ground observation and assessment before doing analytical studies to find suitable solutions,” he said pointing out that areas under MBKS jurisdiction most of which was under the opposition, had seen satisfactory improvement.