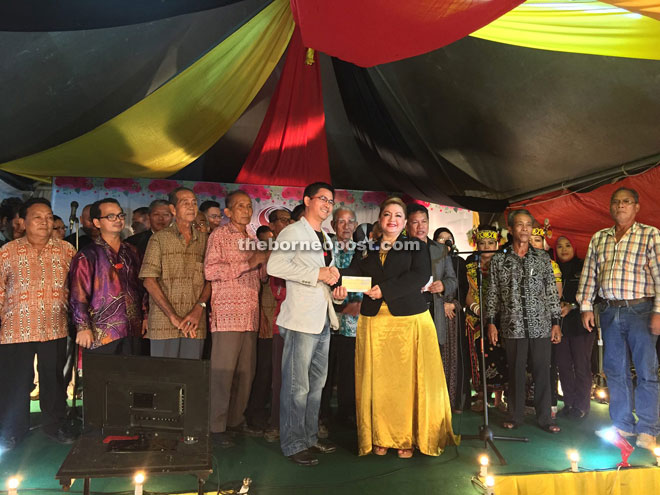 Josephine (third right) presents the cheque to Jude as the association’s committee members and community leaders look on.

The dinner gathering that featured many activities like cultural performances, lucky draw, karaoke singing, beauty pageant as well as fireworks, was attended not only by Marudi folks but also those from Limbang, Bakong and Miri.

The celebration started with the ushering of association president Datuk Josephine Tuah at Marudi airstrip upon her arrival from Miri.

According to Josephine, the office will serve as a one-stop centre for people who seek assistance.

“The office staff will soon be briefed on the United Nation’s World Bank programme as it will be the pioneer programme in the country, which they will disseminate to the public,” she said.

Later, she was swarmed by hundreds of association members who congratulated her on being conferred datukship by Negeri Sembilan Darul Khusus.

The 38-year-old ambassador has been actively going to the ground meeting the people, particularly those in need and assisted the needy group in Baram constituency not only financially but also in social development, education, sports and economy.

In calling for more people, particularly those in Baram constituency, to register as PPMR members, she said the objective of the association is to strengthen unity regardless of race, religion, political views, background and cultural differences.

“Currently, the association has a total membership of 3,500 and we are expecting a few hundreds more to register after the office launching,” she said.

She further said the vision and mission of the association was also to help the people in welfare, health, education, sports and socio-economy.

On the UN World Bank programme, she said it had kicked off in Indonesia where a total of 288 participants from Indonesia were trained for the programme in Port Dickson.

“Malaysia will start the programme probably next year when the logistical planning has been finalised,” she revealed, adding the details would be disclosed in the near future.

At the same event, she handed over a cheque for RM1,000 to RTM Radio Kenyah which was received by DJ Jude Juda.

Siti Noorashikin Azlan, 24, won the ‘Ratu’ title in the beauty pageant and received a sash, bouquet of flowers, cash and crown.

Gladis Sim, 22, from Marudi won second place as well as the subsidiary title of Miss Congeniality.