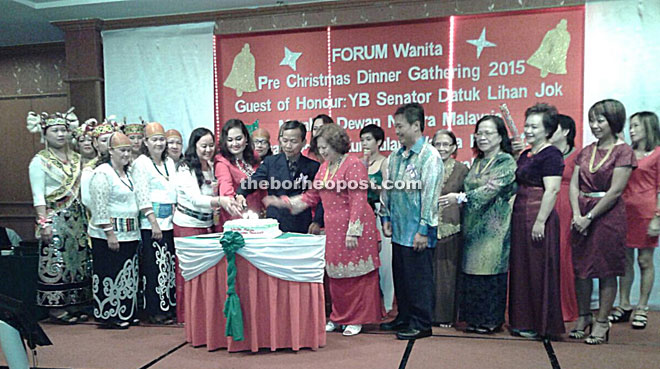 (From sixth left) Lihan and Kijan with other invited guests cutting a Christmas cake during the dinner last Friday.

MIRI: The Federation of Orang Ulu Associations Sarawak Malaysia (Forum) has achieved its objective to unite the community culturally, economically and politically.

According to Senator Lihan Jok, Forum which was formed in 2007 had reached out to all the Orang Ulu tribes and united them as one.

“Being a founding member and the first president of Forum, I am proud to say that Forum has achieved its objective in uniting the Orang Ulu tribes under one umbrella,” he said.

Lihan said this when officiating at a pre-Christmas dinner and gathering organised by the women section of Forum (Forum Women) at Dynasty Hotel here last Friday.

He noted that one of the most important pillars of Forum was its women section formed in 2010.

“Through Forum Women led by its able and hardworking chairlady Kijan Toynbee, various activities and events that not only benefit the Orang Ulu, but also the other communities have been organised.

Lihan also praised the efforts by Forum Women in the development of Orang Ulu women throughout Sarawak through handicraft seminars and workshops.

He added that these activities had enabled the women gain knowledge that could help them generate their own income and be self-reliant.

“It is also through such events and gatherings like this, that members are kept abreast with latest development in the state and the nation.

“I congratulate Forum Women for its dedication and commitment all this while and look forward to their continued hard work, for the sake of Forum and its members,” he remarked.

Also present at the dinner was Forum Women chairlady Kijan Toynbee who is also a political secretary to the chief minister.