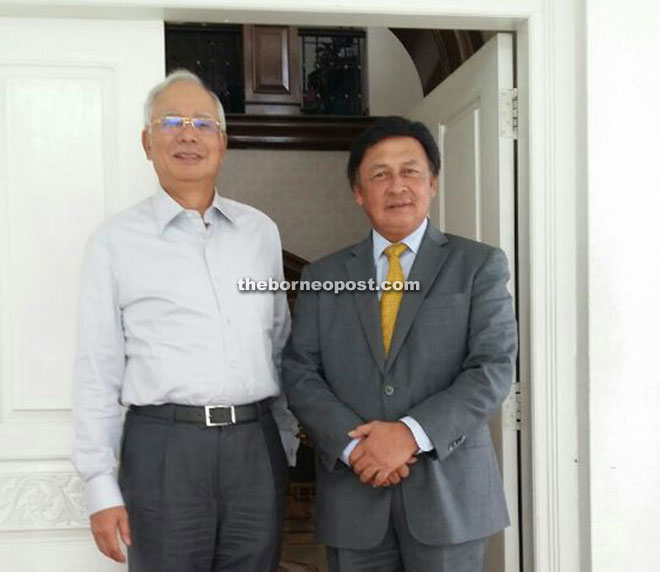 A recent file photo of Mawan (right) and Najib in Kuala Lumpur.

Teras Meluan branch chief Jerry Clement said in spite of his experience in politics, Salang has failed to understand what BN Plus means.

This indicated that Teras is a true blue BN party through a BN Plus formula initiated by Adenan, who is state BN chairman.

Jerry said he would like Salang to recall a June 3 BN rally at Stadium Perpaduan Petra Jaya here where Najib and Adenan declared or announced in public that Teras and another party United Peoples’ Party (UPP) as BN components or BN-friendly parties through the BN Plus formula.

“If Teras members in Meluan are misleading people then the endorsement of Teras leaders as BN candidates by the CM (Adenan) were also misleading?” he asked.

He was referring to Adenan’s annoucement that incumbents for Marudi and Batu Danau namely Datuk Sylvester Entri Muran and Paulus Palu Gumbang respectively would be retained as BN candidates in the next election.

Jerry argued: “If Teras is not a BN Plus component then how come our party president Tan Sri William Mawan was invited by the Prime Minister (Najib) to his home in Kuala Lumpur recently for his (Mawan’s) birthday?”

He even showed the photograph to prove his point.

Jerry also said that quite recently Adenan gave Mawan another RM2 million fund for him to facilitate his official duties in both Meluan and Pakan in which Mawan is the assemblyman.

Salang who is Parti Rakyat Sarawak (PRS) vice president made his comment at Rumah Langan Nanga Serau Lijan in Julau recently when a RM400,000 special grant from Najib’s office was delivered to 12 longhouses there.

He had said PRS would only support candidates recommended by Sarawak Progressive Democratic Party (SPDP) and not one recommended by Teras in the next election because Teras was a party outside the BN.

Teras has not revealed theirs but speculations on the ground are rife one is a semi-government staff and the other a civil servant.

Previous ArticleSUPP eyeing two new state seats in addition to its 19 traditional seats in the upcoming election
Next Article Sibu Resident challenges local youths to be involved in associations, NGOs