Monday, August 10
You are at:Home»News»Sarawak»All round nod for Masing’s motion 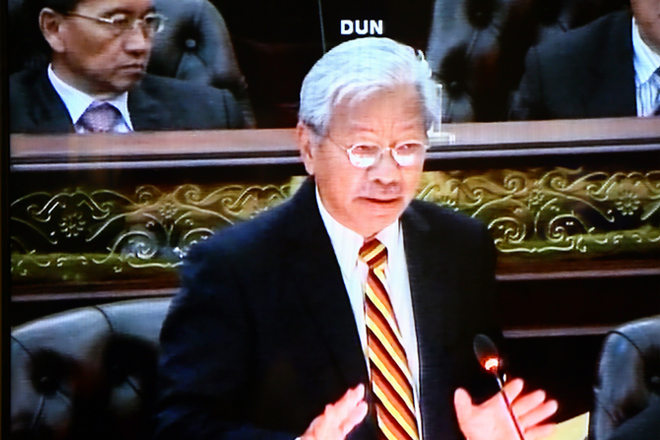 Masing is seen in a screen grab tabling a motion calling on the state government to be fully committed in safeguarding the special interest of the state at the State Legislative Assembly (DUN) yesterday. — Photo by Muhammad Rais Sanusi

THE State Legislative Assembly yesterday unanimously approved a motion tabled by Land Development Minister Tan Sri Datuk Amar Dr James Masing who called on the state government to be fully committed in safeguarding the special interests of the state.

Chong called for the appointment of a Special Select Committee to consider and review the terms of the Malaysia Agreement and the Ninth Schedule of the Federal Constitution on four areas, namely Education, Healthcare, Internal Security and Taxation, while Wong tabled a motion on the use of English as the official language of Sarawak.

The motion tabled by See was to call on the august House to preserve and uphold the territorial integrity of Sarawak and Rejection of Territorial Sea Act 2012 as well as on the setting up of a commission to look into the constitutional and legal framework for devolution of powers to Sarawak.

Prior to the passing of the motion tabled by Masing, it was debated and supported by Assistant Minister of Housing Datuk Abdul Karim Rahman Hamzah, Chong as well as See.

Masing, who is also Baleh assemblyman, proposed that the august House mandates the state government to take all measures and action under Article VIII of the Malaysia Agreement with the federal government to ensure the complete implementation of all the recommendations of the Inter-Governmental Committee (IGC) Report for the advancement and safeguard the special interests of the state and the peoples of Sarawak.

“We also called on the state government to realign federal policies on education, health and official language so that they are consistent with the constitutional safeguards and the terms of the IGC Report.”

He also called for a review of the grants and other revenues assigned to the state shall be initiated and the discharge of financial burdens by the federal government on subject matters in the Concurrent List and additional sources of revenues be made available to the state government to carry out its constitutional functions and responsibilities to the people.

“We propose for the delegation of federal functions and powers to the state to ensure the efficient and effective monitoring or supervision, and timely implementation, of federal works and infrastructural projects in the state or projects designed to improve the welfare of the rural communities.”

Masing called for a review of all legislations that affect the state’s rights to its natural resources of the exercise powers and functions in relation thereto, under the Federal Constitution, within its boundaries and upon such review, to amend or repeal such legislation.

Finally, he called for a review of those federal government’s decisions or policies which were found to be inconsistent with the aspirations of the people of the state as noted in the Cobbold Commission Report and the IGC Report at the time of the formation of Malaysia.

According to Masing, the state government was firmly committed to accelerate the economic and social progress made by the state since Malaysia Day to enable the state to reach the level of development of the states in Peninsular Malaysia and be part of a developed nation by 2020.

He also said the state government was desirous that the state shall continue to have the authorities vested in the state under the Federal Constitution and additional sources of revenues, and full and meaningful consultation on all decisions, actions, plans, programmes, projects and policies which affect or concern or impact the state and its peoples.

Masing said the state was firmly committed towards strengthening the relationship between the state and federal governments in order to realise the goals of accelerating economic and social progress in the state particularly in the rural areas and to improve the welfare and well being of all communities in the state.

“The continued progress and advancement of Sarawak and the respect for the constitutional safeguards and special interests of the state will promote and strengthen national unity and contribute towards a strong and prosperous Malaysia.”

In his winding up speech, he thanked all the elected representatives for supporting the motion, adding it was important for all of them to speak on the same page on ways to preserve Sarawak’s rights.

“I would like to thank the member for Batu Lintang who spoke on territorial rights. There are two Acts that are very important to us; one is Territorial Sea Act 2012 and Continental Shelf Act 1966,” he said, adding that the Petroleum Mining Act 1966 was also equally important that the state government would look into.