Monday, July 13
You are at:Home»News»Sarawak»‘Not wrong to revisit Malaysia Agreement’ 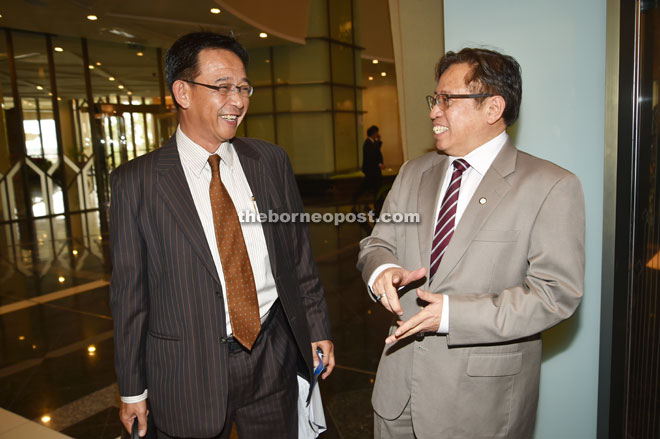 IT is not wrong for the state to revisit what its forefathers have agreed to when the Malaysia Agreement was penned on July 9, 1963.

Assistant Minister of Housing Datuk Abdul Karim Hamzah said there were various factors that ought to be looked into especially when Sarawak attained independence through Malaysia more than 50 years ago.

“These are natural questions that come to us especially now with the increase in social media where people are able to access information easier and with a population with a good eduction background, there’s a lot of questions being asked,” he said in his debate to support the motion calling on the state government to be fully committed in safeguarding the special interest of the state which was tabled by Land Development Minister Tan Sri Datuk Amar Dr James Masing at the State Legislative Assembly yesterday.

Abdul Karim (BN Asajaya), who seconded the motion, said Sarawakians had experienced many levels of unhappiness throughout the years on issues concerning the rate of infrastructure such as the condition of schools, hospitals, clinics, roads, electricity and clean water supplies in the state, and the insufficient funding given by the federal government among others.

“There is also unhappiness of certain policies such as the usage of English, the use of the word ‘Allah’, and the right to practise one’s faith through the years as well as unhappiness over erosions of the rights of our territory especially on the ‘continental shelf’ which even before we formed Malaysia, are recognised as ours.”

“I won’t go into the very details on what are the areas that have been eroded but suffice for me to say that some of these matters have been highlighted by Our Right Honourable Chief Minister (Datuk Patinggi Tan Sri Adenan Satem) in his speeches across the state, in Peninsular Malaysia as well as by members of this august House,” he said.

Abdul Karim also said it was enlightening that the state government had set up several committees to discuss these issues with the federal government.

“It is enlightening to see that the state government is looking into this and we have got our own way of trying to address this problem so it will be a win-win situation for the state and the nation.

“The answers to these have not come about but slowly, we can see that the federal government is giving what we have requested for such as the (Pan Borneo) Highway, which is already undergoing construction now in Teluk Melano-Sematan and another in Bintulu while the request for increase in oil royalty as well as contracts of the oil industry to be given to local or state-linked companies seemed to be getting attention from Petronas and the federal government,” he said, adding that with the committees being set up, hopefully there’s light at the end of the tunnel for the state to be given more empowerment from the federal government.

Abdul Karim also took the opportunity to make a playful jab at the opposition stating that they had been trying to jump on the ‘popularity bandwagon’ that Adenan has created.

“It cannot be denied that Our Right Honourable Chief Minister has been steadfast in his efforts to get back the rights that are rightfully ours and which have through the years been taken away or diminished from us and unfortunately the opposition has tried to jump on the bandwagon as (prior to this) we have not heard them talking about this.

“It is probably because the election is near and they might have run out of issues. This is the first time I’ve seen so many motions (from the opposition) practically related to the same subject matter which is on the state-federal relationship,” he said.