Tuesday, January 21
You are at:Home»News»Sarawak»Three collared for stealing durians from orchard 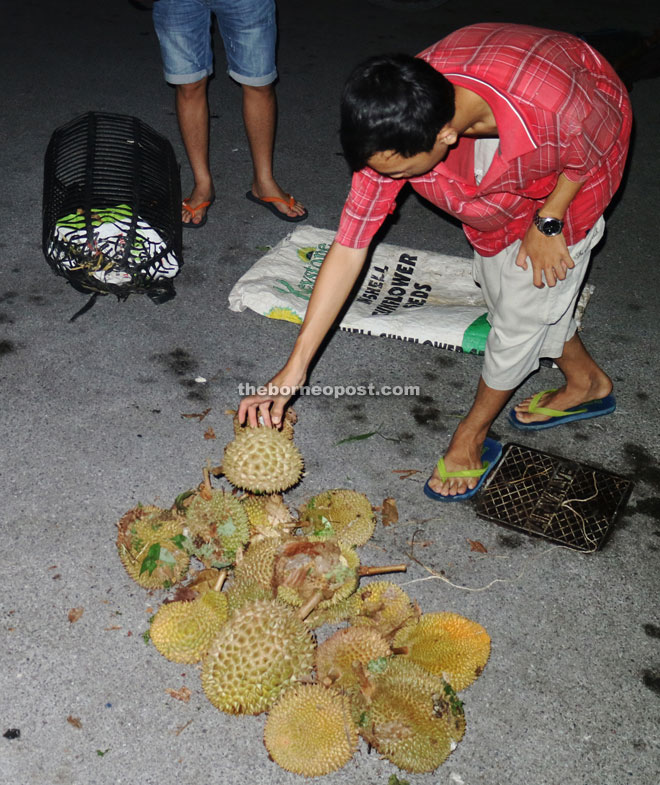 The orchard owner’s grandson shows police some of the durians recovered from the suspects.

KUCHING: Three persons were arrested Thursday night for repeatedly stealing durians from an orchard in Santubong.

The trio were apprehended around 10pm by the orchard owner and his grandson after they decided to lay in wait to catch those responsible for stealing the fruits since the beginning of the current durian season.

The 60-something owner said he began noticing the theft at his orchard in Sungai Buah, which has more than 100 durian trees, after arriving on many occasions to find not a single fruit on the ground.

“In fact, the thieves had even plucked many unripe fruits from the durian trees,” he complained when met at the police station, adding he had previously lodged several police reports on the matter.

Recounting the citizen’s arrest, he said both he and his grandson spotted four men trespassing into the orchard and filling two gunny sacks with durians which had fallen on the ground.

Despite being outnumbered, the pair emerged from their hiding spot and managed to apprehend three of the men, but could not prevent the fourth from running away.

They handed over the suspects to the police, who also recovered a motorcycle belonging to the suspects at the scene, along with the two sacks containing over 20 durians as evidence.

A check later revealed the suspects aged between 20 and 40 years all hailed from Rampangi in Santubong.

With the arrests, the owner said he hoped cases of theft at his orchard would come to an end, although he did not discount the possibility that more than one group was responsible for stealing his durians.