Thursday, August 11
You are at:Home»News»Sarawak»Bujang Mohd Nor is acting TYT of State 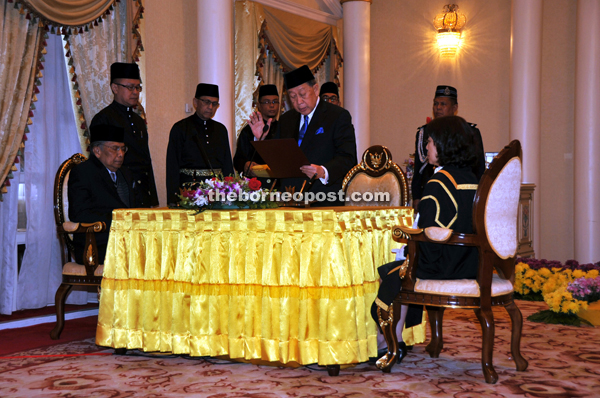 Bujang Mohd Nor takes his oath as acting Head of State.

The oath-taking ceremony yesterday began with the reading of the ‘Official Announcement of Appointment as Acting Yang di-Pertua Negeri of Sarawak’ from the Agong, which was performed by Chief Minister Datuk Patinggi Tan Sri Adenan Satem.

Bujang was born on Aug 8, 1935 in Kampung No 5, Sungai Lajim. He served as Lawas District officer in 1962 and was made First Class Magistrate in Lawas.

He has also held the post of assistant chief secretary in the Ministry of Natural Resources.

Currently, he is chairman and board member of various organisations and companies.